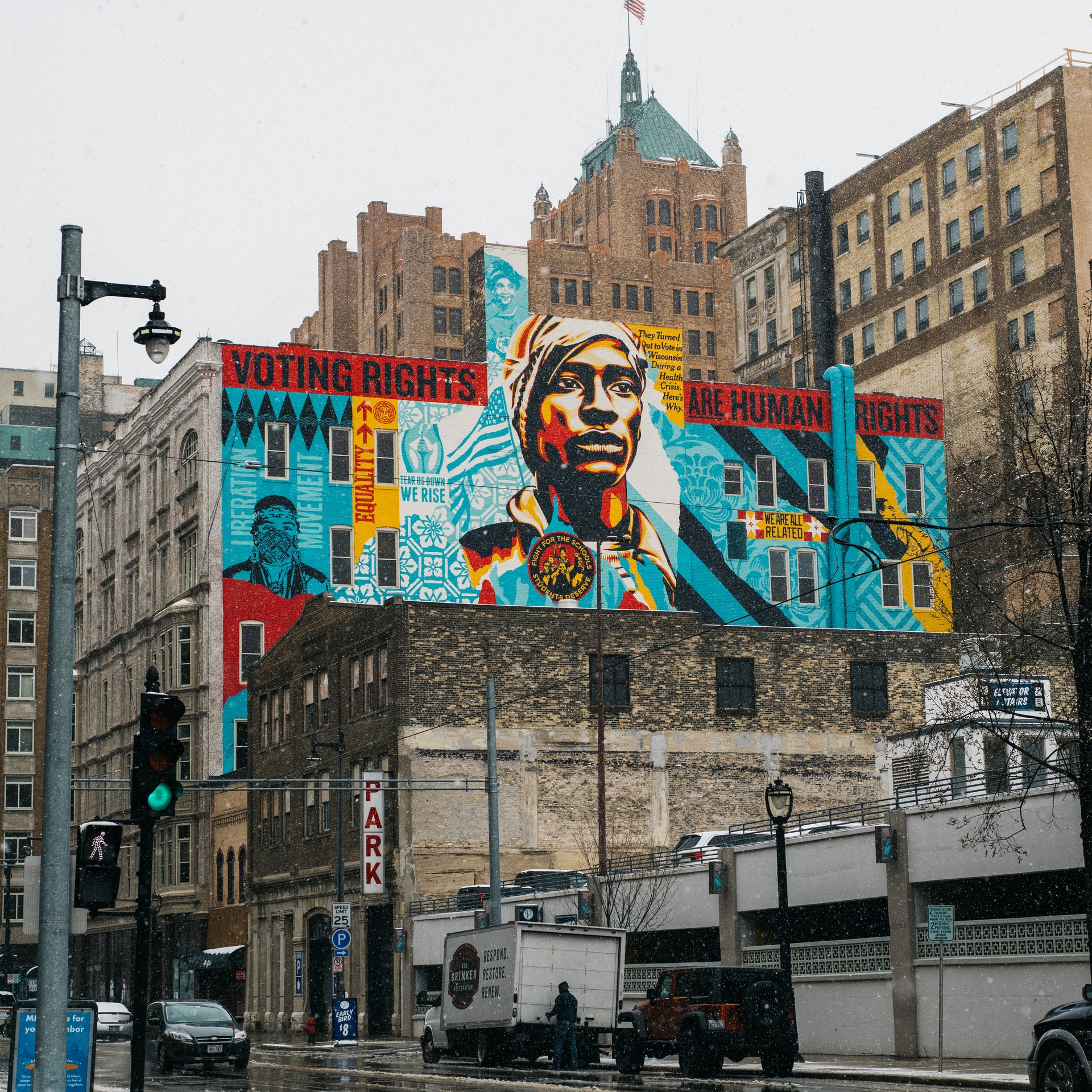 Photo Via Tom Barrett on Unsplash

The ability to participate in free and fair elections is one of our most sacred and fundamental rights as citizens. It is preservative of all other rights; a gateway to ensuring that our representatives in government reflect the will of the people and govern in our best interest. Yet the truth is that this right has never been equally granted to all citizens. After the founding of the United States of America, the right to vote was initially reserved for a privileged few, largely propertied, White males. Only through profound social mobilization and heroic struggles have women, Black and Brown citizens, Indigenous peoples, Asian-Americans, students and young people, ethnic minorities, and the working poor secured their right to vote and participate in the American political process.

Today the guardrails of America’s representative democracy are under assault. An alarming offensive against the country’s key democratic institutions is underway and gaining momentum. This attack is aimed at the principles of universal suffrage in general, and especially the voting rights of people of color. This effort is being spearheaded by the Republican Party, conservative billionaires, and the most environmentally destructive corporations in America. Termed the Polluter-Industrial Complex by GCCJ Senior Fellow Daniel Faber, these are the sectors of Big Business that would stand to profit the most from a weakening of environmental regulations, public health and safety measures, and climate change legislation. The oil and gas industry stands at the top of the list, along with tobacco companies, petrochemical corporations, agribusiness, timber and mining interests, railroads and automobile manufacturers, and other heavily regulated corporate polluters. It also includes other industries, like insurance companies, that are heavily invested in fossil fuels. They are among the leading industries pouring money into a complex web of anti-environmental and climate change denial organizations – all in an effort to thwart meaningful action on the ecological crisis.

Many of these same corporate polluters are bankrolling the politicians and organizations that are in the forefront of the anti-democracy and voter suppression efforts targeting people of color. The reason is simple: Indigenous, Asian-American, Black, and Brown communities are in the forefront of the struggle for environmental protection and climate justice. To politically disempower these communities of color serves the economic interests of the polluter-industrial complex and the political interests of the Republican Party. Voter suppression enables business-friendly politicians bankrolled by corporate polluters to gain control over the state and thwart movements for environmental and climate justice, economic equality, women’s rights, and racial justice. The concentration of political, financial, and economic power held by the PIC is enormous, and continues to grow. Their abuse of power is at the root of the crisis of American democracy.

As voter suppression bills are hitting the desks of state legislators and the U.S. Congress, with aspirations to solidify the control of the PIC, numerous organizations nationwide are working tirelessly to defend this democratic right, enshrined in our country’s most sacred text.

As the largest public law firm in the United States, the American Civil Liberties Union (ACLU) plays an integral role in America’s advancement of civil rights and social justice. The length and breadth of the ACLU extends to all 50 states, along with Puerto Rico and Washington D.C. Over the past century, they have acted as fundamental advocates in cases regarding free speech, indiscriminate protection, privacy/technology, and religious liberty, especially defending those who have historically been denied their rights.

Additionally, as an independent, nonpartisan law and policy organization, the Brennan Center for Justice works to protect American democracy, and focuses on five five issues: voting rights and elections; money in politics; government and court reform; justice for all; and liberty and national security. With only 70 percent of the voting-eligible population registered to vote in the 2020 presidential election, the institute works toward revamping the voting system and ensuring that “every eligible voter is permanently registered.”

Comprising over a 1 million total member base with members in every congressional district in the nation and a presence in 30 states plus Washington D.C., Common Cause brands itself as “the people’s lobby” that serves as “an independent voice for change and a watchdog against corruption and abuse of power.” In conjunction with its affiliate, the Common Cause Education Fund, Common Cause focuses on a variety of issues such as campaign finance, gerrymandering, and government accountability. The organization is notable for its historic impact in bolstering American democracy— from leading the campaign that annexed the 26th amendment to the Constitution, playing a key role in uncovering Nixon’s Watergate scandal, passing the nation’s first open meetings law, to establishing watchdog agencies keeping politicians in check. Common Cause continues such momentous work today in modernizing elections, upholding political accountability, bringing transparency to government budgets/spending, amplifying the voices of small dollar donors, and mobilizing citizen watchdogs.

The Voting Rights Alliance is a non-partisan network of organizations, activists, and legislators working to restore and protect voting rights from concerted attacks that undermine our access to the polls, and to have votes fairly counted.  Member organizations include: the National Organization for Women; Hip Hop Caucus; Latinos United for Change; and the African American Policy Forum.

In efforts to promote inclusivity in the democratic process, the League of Women Voters (LWV) “encourages informed and active participation in government.” LWV’s focal issue areas involve: expanding voter access, fighting voter suppression, limiting superPACs and secret donors, as well as combatting gerrymandering. Regarding voter suppression, LWV has made its mark in actively opposing discriminatory voter photo ID laws, fighting against attacks against the voter registration process, and holding lawmakers accountable in their attempts at instituting last-minute Election Day barriers. Like numerous other organizations, LWV works to modernize voting systems and streamline the voting process while also helping ensure compliance with laws including the Voting Rights Act and the National Voter Registration Act. Another featured resource is their Voter Mobilization Webinar, which discusses their Voter Mobilization Project’s efforts in getting low propensity voters to the polls.

Organizations such as Black Voters Matter (BVM), the National Association for the Advancement of Colored People (NAACP), and the Native American Voting Rights Coalition seek to increase power in marginalized, predominantly Black and indigenous communities. Effective voting allows a community to determine its own destiny. BVM utilizes authentic messaging which speaks directly to issues in the Black community, and especially Black women.  The NAACP works to reduce inequality, dismantle racism, promote civil rights and social justice, and stop voter suppression. The NAACP is working for racial justice in such key areas as criminal justice reform, health care, education, climate justice, and the economy. The main goals of the Native American Voting Rights Coalition are to remove barriers to Native American voter registration and voting, increase Native civic engagement, and foster a more informed and active Native electorate. With mounting evidence of voter suppression and violations of voting rights laws, NAVRC has accelerated its work on addressing violations observed in the 2016 elections and overseeing the largest survey of Native voters ever conducted. The Native Voter Fund provides an effective way to donate to local Native-led organizations with a track record of voter registration, election protection, and getting Native voters out to the polls. The Fund also works on local community building, advocacy and issue organizing year-round, in addition to voter engagement.

In the 2020 election, only 50 percent  of 18-29 year olds exercise their democratic right to vote.   Geared towards increasing voting accessibility for young people, Rock the Vote takes an innovative approach at increasing and defending the youth’s voting rights by deploying impactful messages, tactics, and technology to empower each new generation. The organization fights to combat the aggressive efforts suppressing young peoples’ vote, such as “restrictive voter ID laws, the removal and legal restriction of polling places on college campuses, non-delivery of absentee ballots, and proof-of-residency requirements.” Rock the Vote works to create a culture of civic engagement that ecompasses young people and guides them through the voting process.

At the Global Center for Climate Justice, we are working to publish an upcoming report illuminating the connection between funders of voter suppression and funders of climate denialism and inaction. This timely report describes how voter suppression legislation in the US is a major driver of climate injustice. Deeper analysis finds that patrons of voter suppression policies are heavily involved in the gas and oil industry, tobacco companies, petrochemical corporations, and other heavily regulated corporate polluters who stand to profit from a weakening of American democracy, environmental regulations, and climate change legislation. The communities who are most impacted by the risks of the climate crisis are Black, Brown and Indigenous communities. Not only are these communities most likely to support pro-environmental pro-climate change candidates, but they are also ones who are being targeted by voter suppression tactics. It is guaranteed to be an eye-opening read!