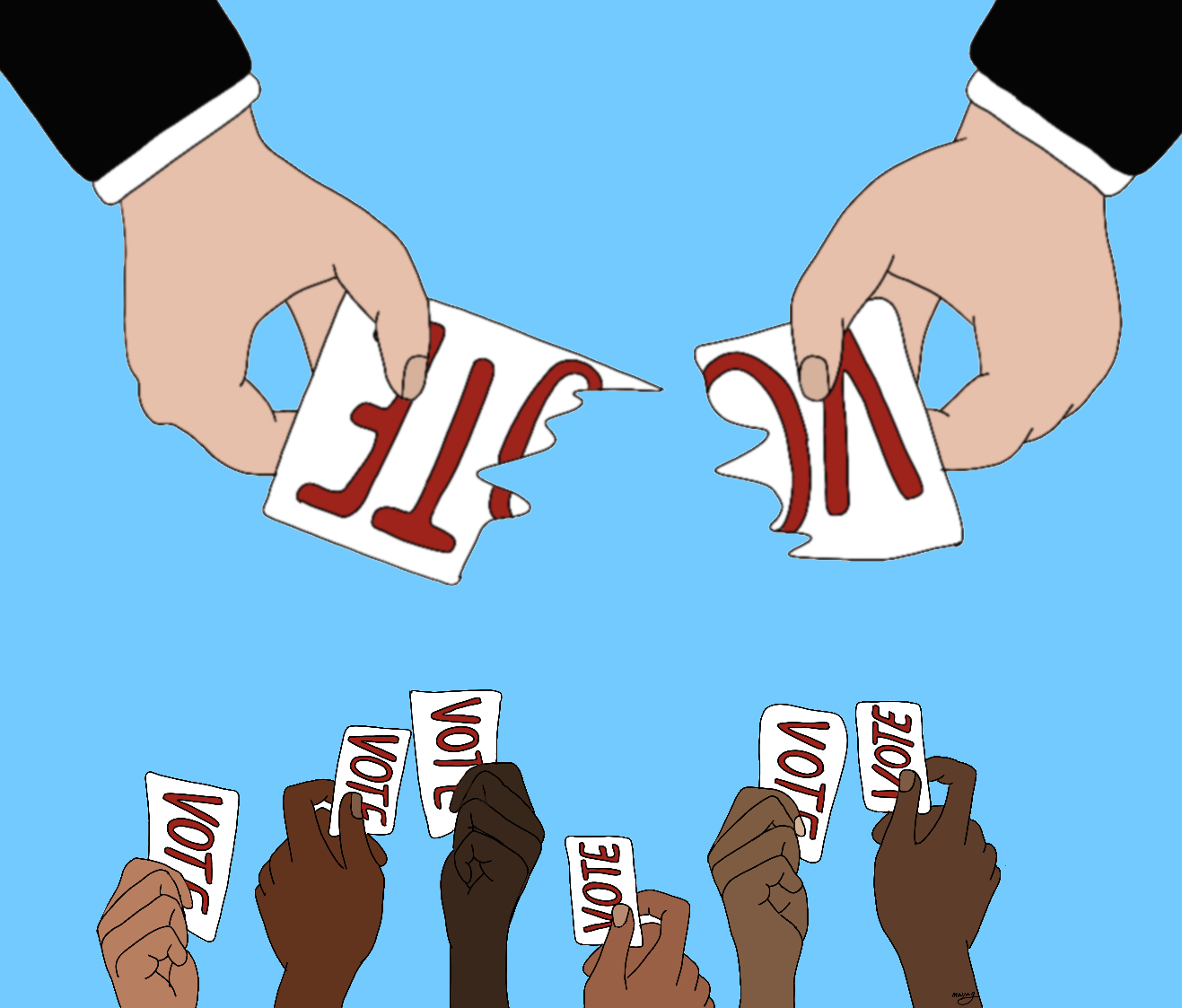 Under the shelter of its stars and stripes, the United States Constitution’s intention is to protect our unalienable rights and guarantee equal justice to all citizens. Voting is a time-honored and celebrated tradition that ensures that our representatives in government reflect the will of the people and govern in our best interest. The right to vote is given sanctity in this democratic text. It is a right easily and often assumed to be universal. But it has only been through profound social mobilization and struggle over the preceding centuries that women, Black and Brown citizens, Indigenous peoples, Asian-Americans, young people, and the working poor secured their right to vote and participate in the American political process.

Alongside the triumphs for American democracy, there have always been counter movements aimed at undermining representative government in America. Efforts to deny the right to vote have historically included poll taxes, literacy tests (a test of one’s ability to read and write with the purpose of excluding those with minimal literacy from voting), registration labyrinths, and calculated misinformation and intimidation tactics. Some of these tactics are still in use to today. These methods of repression all served to preserve white supremacy and class rule by corporate elites, particularly during the 19th and 20th Centuries. Voter suppression tactics have long sought to divide and conquer the mosaic of American identities that might organize the systemic changes necessary to achieve social, racial, and environmental justice.

Despite more than two hundred years of American history and generations of civil rights activism demanding social, political, environmental, and educational justice, the stain of injustice lingers in the fabric of America's core institutions. In the 21st Century, voter suppression tactics are remerging with a vengeance in order to solidify the control of corporate polluters over the United States’ government at all levels. The polluter-industrial complex (PIC), as termed by Senior Fellow Daniel Faber in Capitalizing on Environmental Injustice: The Polluter-Industrial Complex in the Age of Globalization, are the sectors of business that would stand to profit the most from the decaying of environmental regulations and climate change legislation. The oil and gas industry, tobacco companies, petrochemical corporations, and other heavily regulated corporate polluters are the key actors that stand to profit from a weakening of American democracy, environmental regulations, and climate change legislations. Eleven PIC companies alone provided over $2.8 million in corporate funds directly to state lawmakers supporting voter suppression bills from 2015 to 2020. These companies include the tobacco giant Altria/ Phillip Morris ($810,915); the oil services giant Koch Industries ($293,000); Dominion Energy ($280,050); another tobacco company RAI Services/ Reynolds American ($263,350); American Electric Power ($209,450); Exelon Corp ($207,550); Marathon Petroleum ($205,365); General Motors ($185,100); Exxon Mobil ($131,250); Chevron ($116,200); and Waste Management ($107,000).

Their strategy is working. The outcome of the 2020 elections generated a hotbed of conspiracy theories regarding the validity of the election results. The state of Arizona, for example, was one of many states that became a focus of Trump’s “Stop the Steal” Campaign, aimed at confirming myths of voter fraud. An unprecedented months-long post-election recount of 2.1 million ballots was authorized by the Arizona state legislature, ultimately affirming Biden’s win. Although election audits debunked the incidence of voter fraud, a slew of voter suppression legislation has emerged across the country. Recently, Arizona Republicans have proposed a bill that would impose significant voting restrictions on the state’s residents by restricting mail-in voting, limiting the voting period to election day only, and allowing the state legislature to reject election results. Most worrisome is that the contents of the legislation do not mandate evidence of election fraud be presented to overturn an election.

The heart of this strategy is aimed specifically at suppressing the voting rights of Black, Brown and Indigenous communities, citizens residing in low-income communities, students, and progessive sectors of the White working class. Not coincidentally, these are the people and communities on the front lines battling the climate crisis and who are disproportionately at risk for environmental harms like air pollution exposure, water contamination, and radiation, resulting in higher vulnerabilities and health effects.

The voter suppression of today deliberately targets and disenfranchises the voters who are more likely to hold strong pro-environmental and pro-climate change views. Dr. Robert Bullard, a White House Environmental Justice Advisory Council member, states “America is segregated, and so is pollution. The same racist and undemocratic forces that allow communities of color to be disproportionately poisoned are also implicated in disproportionately suppressing… voters and subverting our democracy.”

If we have your attention now, stay tuned for more on the intersection of Voter Suppression and Climate Justice and what the movement can do about it in our upcoming report.