Thank you! Your submission has been received!
Oops! Something went wrong while submitting the form.
Last Issue
Archive
Cartoons Coming soon 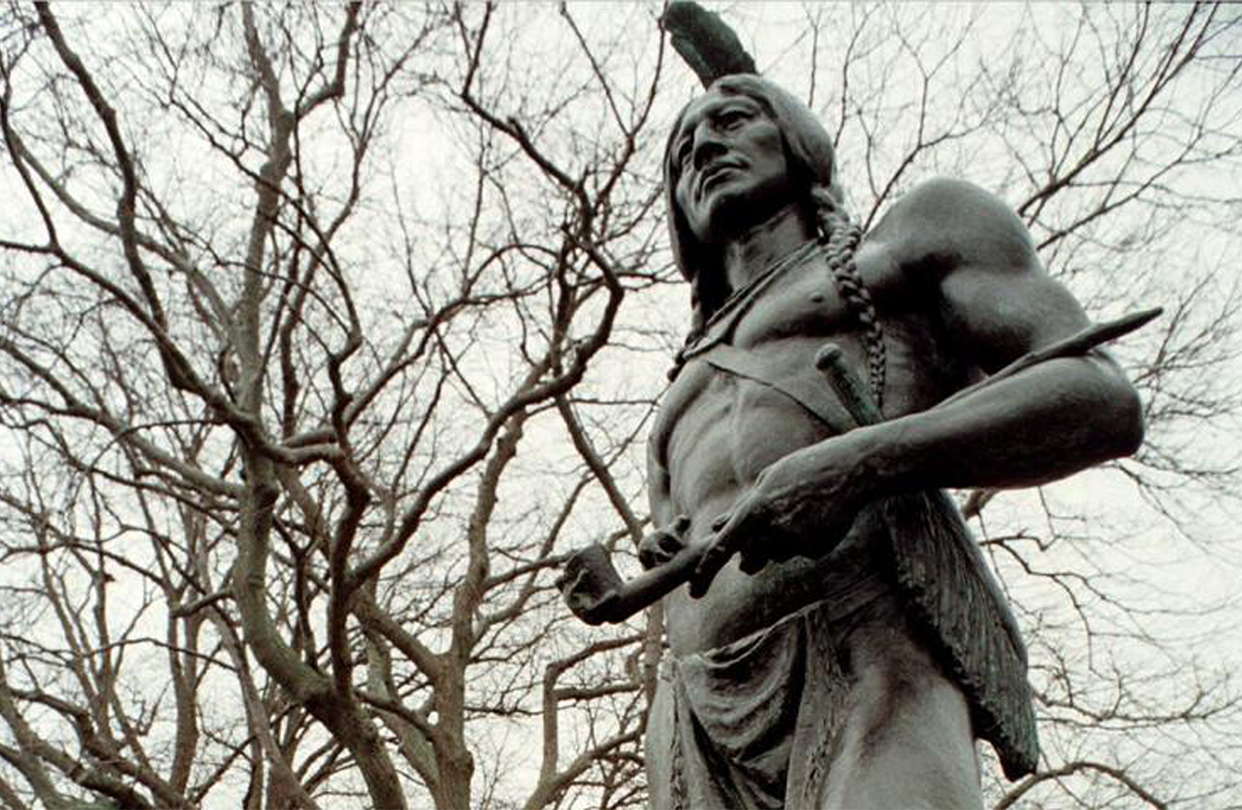 This week, many of us will criss-cross the country to celebrate an unusual American holiday that is Thanksgiving. We each have a responsibility to remember the true history of Thanksgiving, and resist the ways in which the dominant, sanitized narrative of the holiday has colonized our lives. This remembrance and resistance takes many forms. This week we launch our newest report: A Green New Meal: How Factory Farming Fuels Climate Injustice and What We Can Do About It. It is guaranteed to be an eye-opening Thanksgiving read! 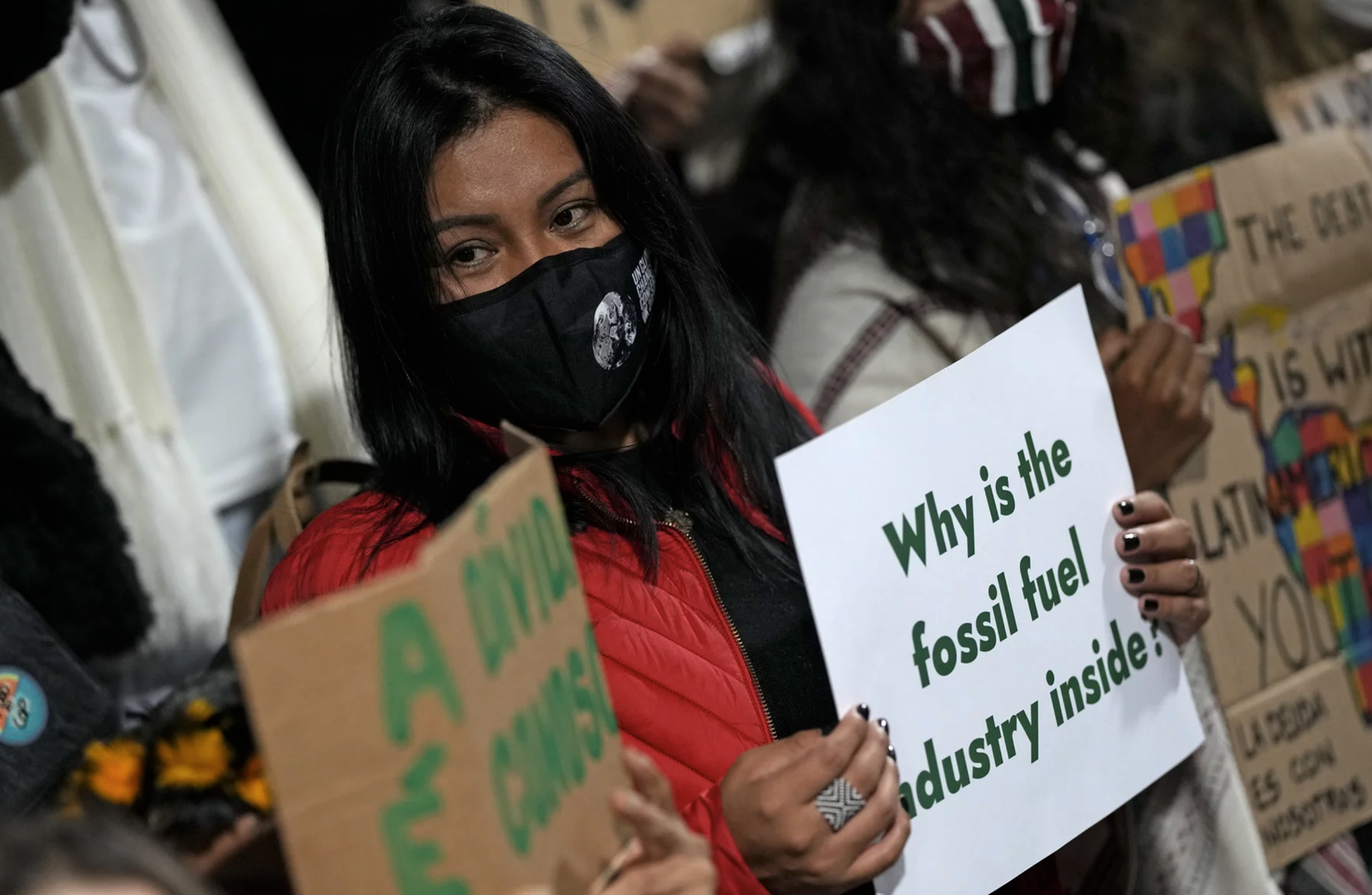 The climate justice movement must work to leverage the power of currency to create a more just, sustainable, and equitable world. While this may sound utopian, there are already proven financial investment models based on principles of social and environmental justice that can provide an alternative to the destruction wrought by the current capitalist world system. 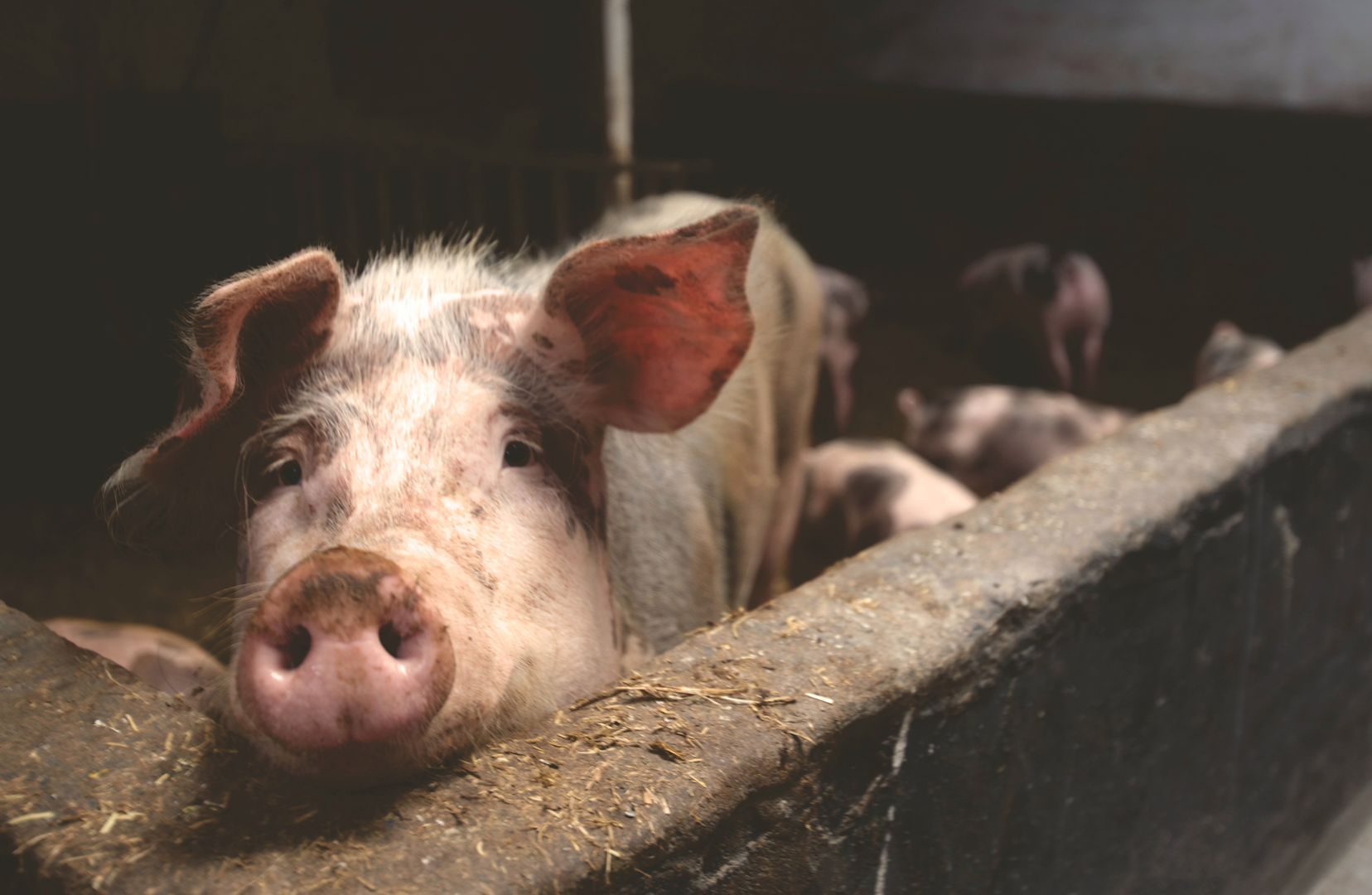 The Center’s latest report, A Green New Meal: How Factory Farming Fuels Climate Injustice and What We Can Do About It, has just been released. Here is a collection of some of the most important definitions associated with Factory Farming. Read the Report (linked) for more! 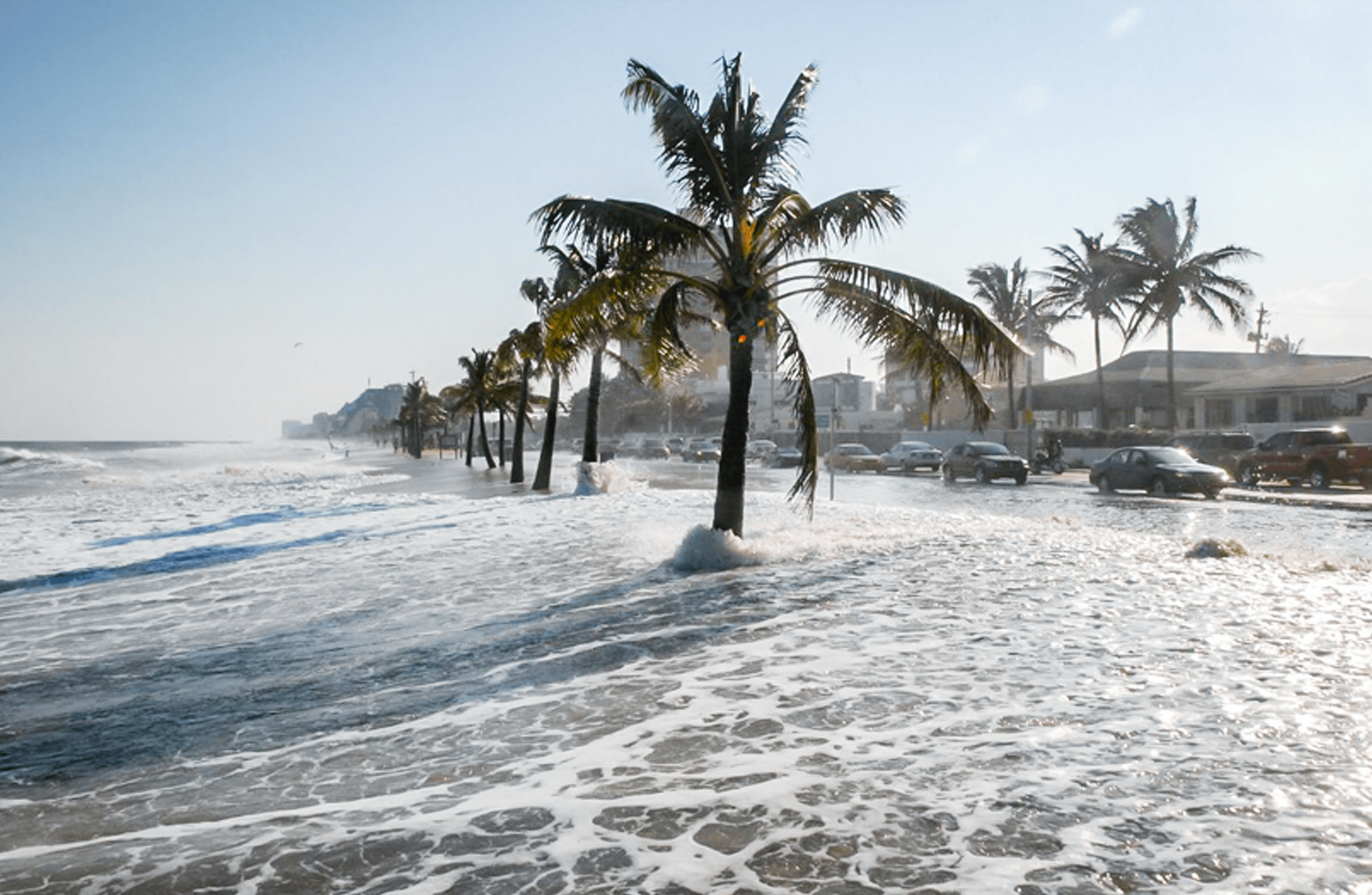 Climate Impacts
On the Rise: The Surging Threat to Coastal Communities
Kimberlee
Cook

The 20th century saw an unprecedented increase in global mean sea level (GMSL), rising faster than any prior century for 33 millennia. But low-lying coastal communities like Miami-Dade, Florida are the ones facing the most severe social, economic, and political ramifications of GMSL rise. 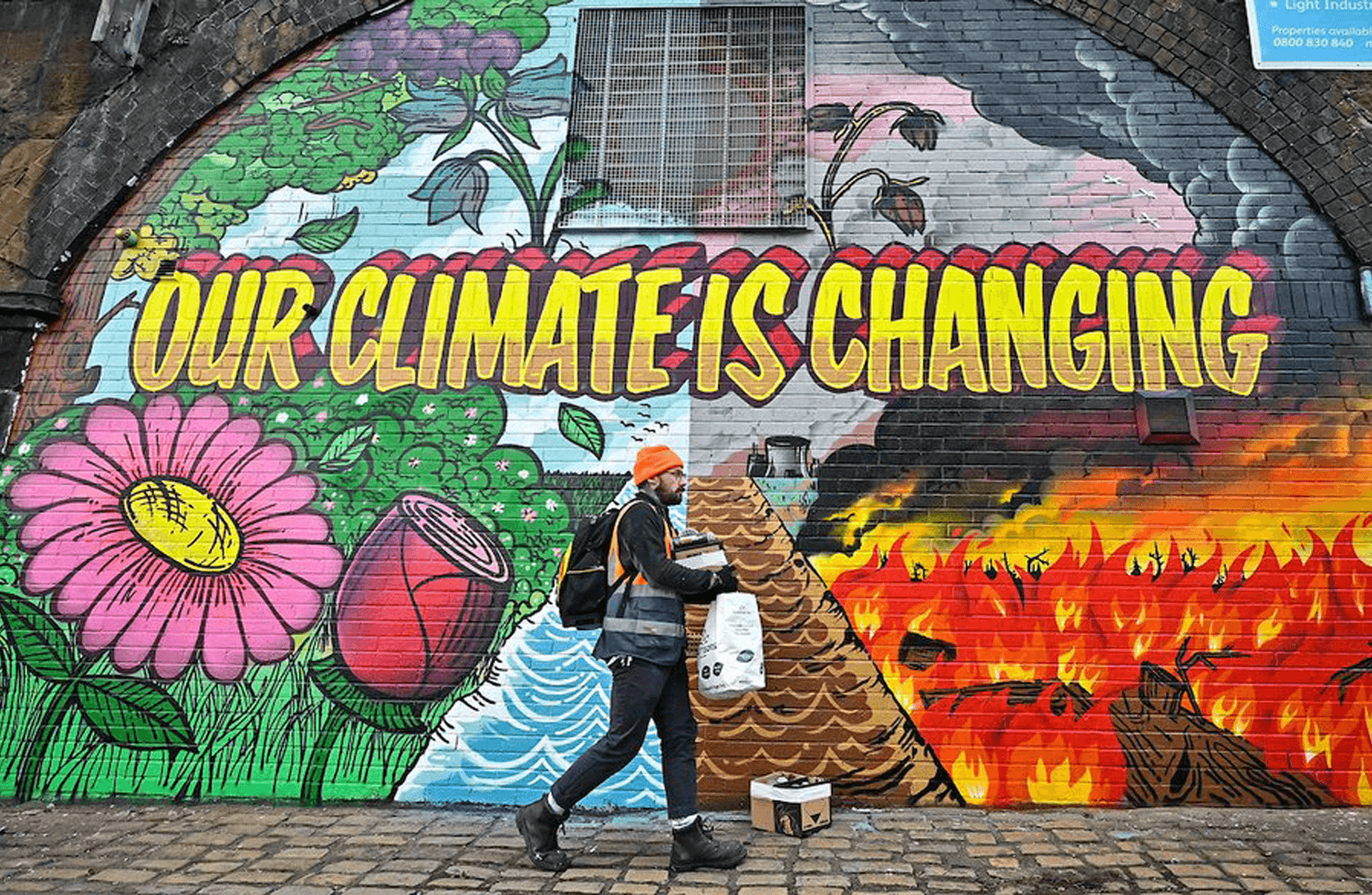 For the past two weeks, many of the world’s leaders and representatives have converged in Glasgow, Scotland, for the 26th annual Conference of Parties (COP26). But as its end quickly approaches, it is increasingly clear that the conference is grossly inadequate on nearly all fronts. Meanwhile, as official negotiations flail, the COP26 Coalition has brought together movements from across the world to build power for system change at the People’s Summit. 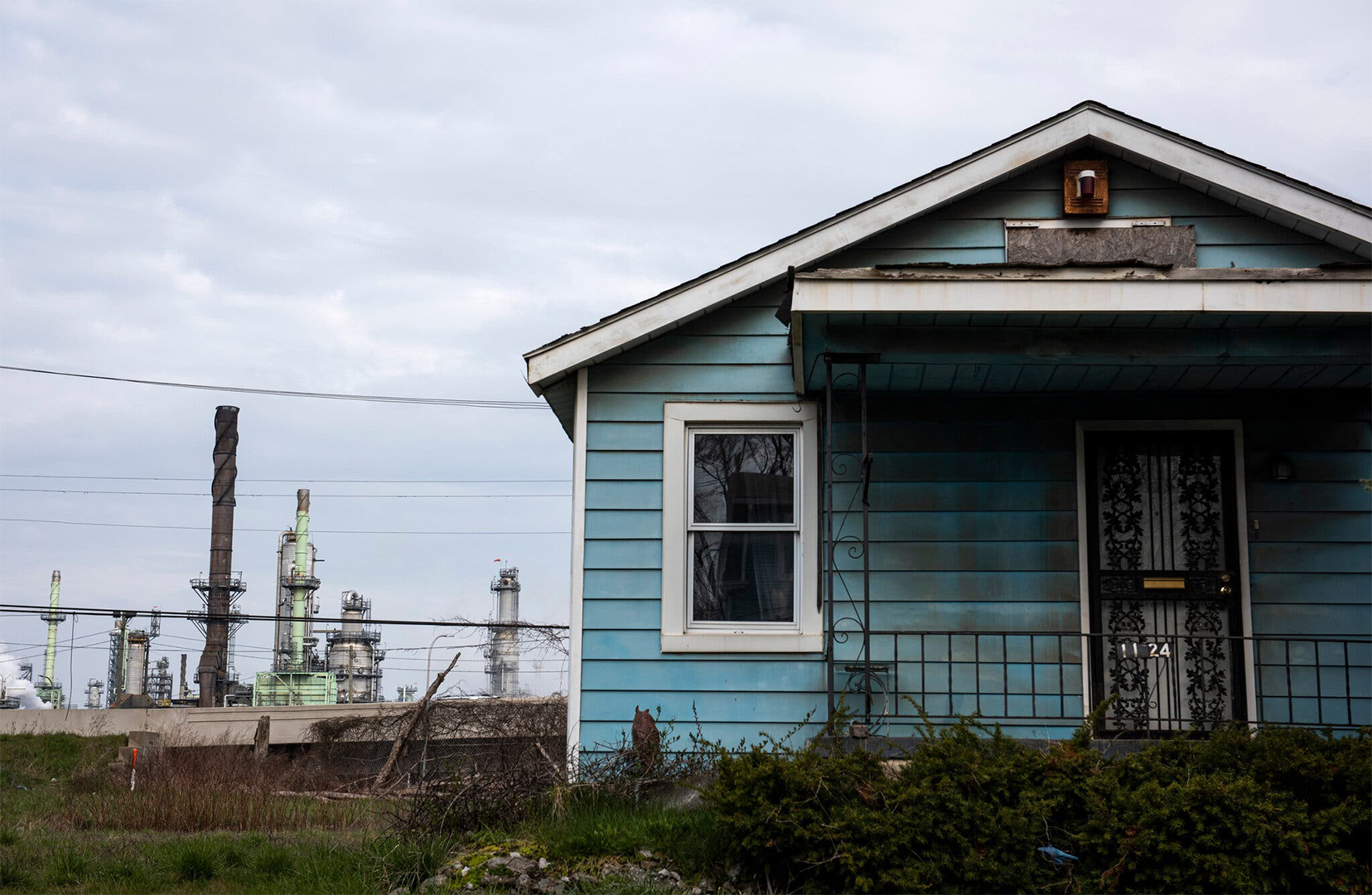 Externality theory describes the practice of corporations displacing negative environmental effects on to other members of society not involved in the original producer-consumer transaction, oftentimes intentionally to avoid paying for expensive environmental protection technology. 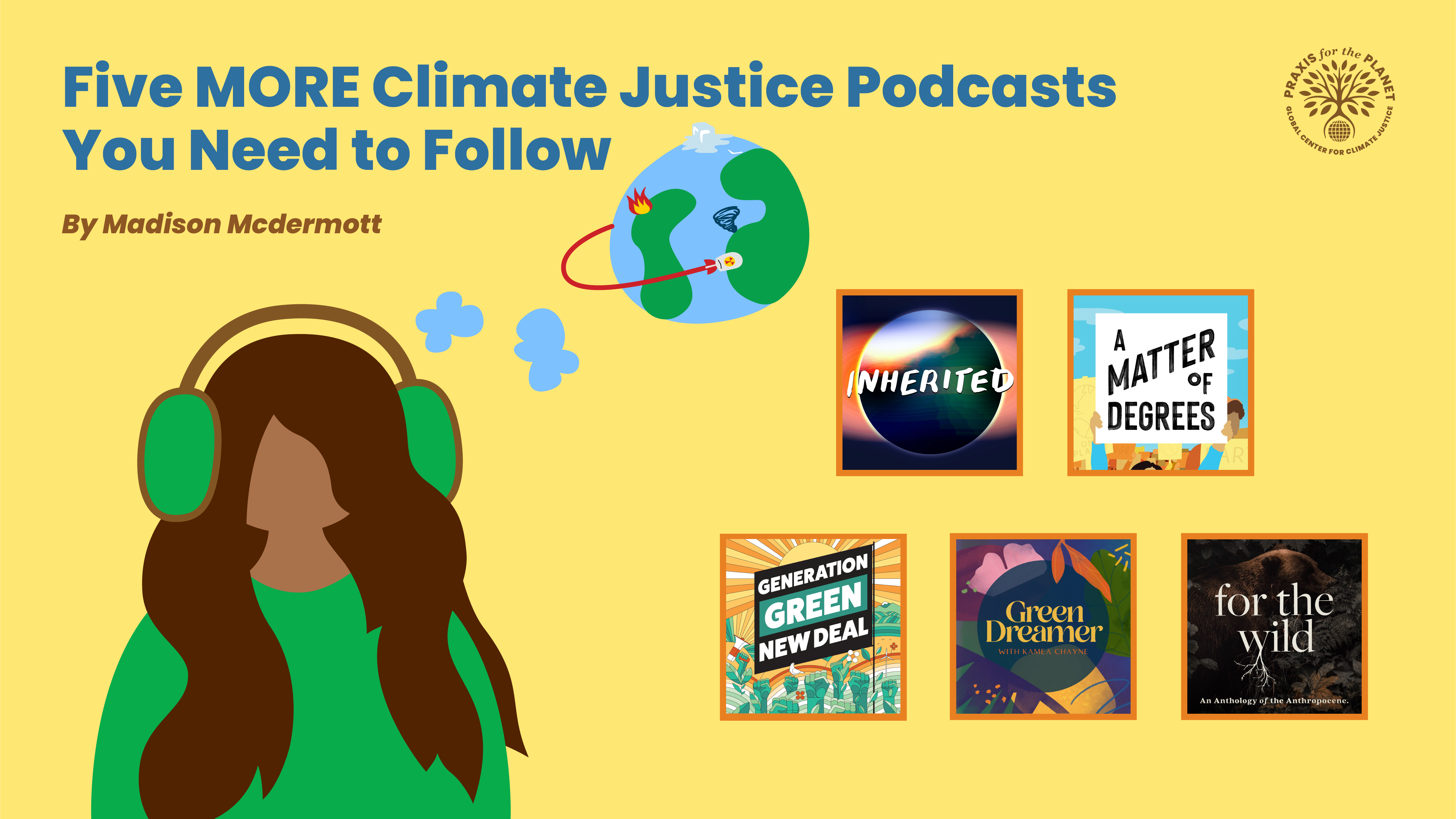 Here are five more climate justice podcasts we love and think you should listen to! 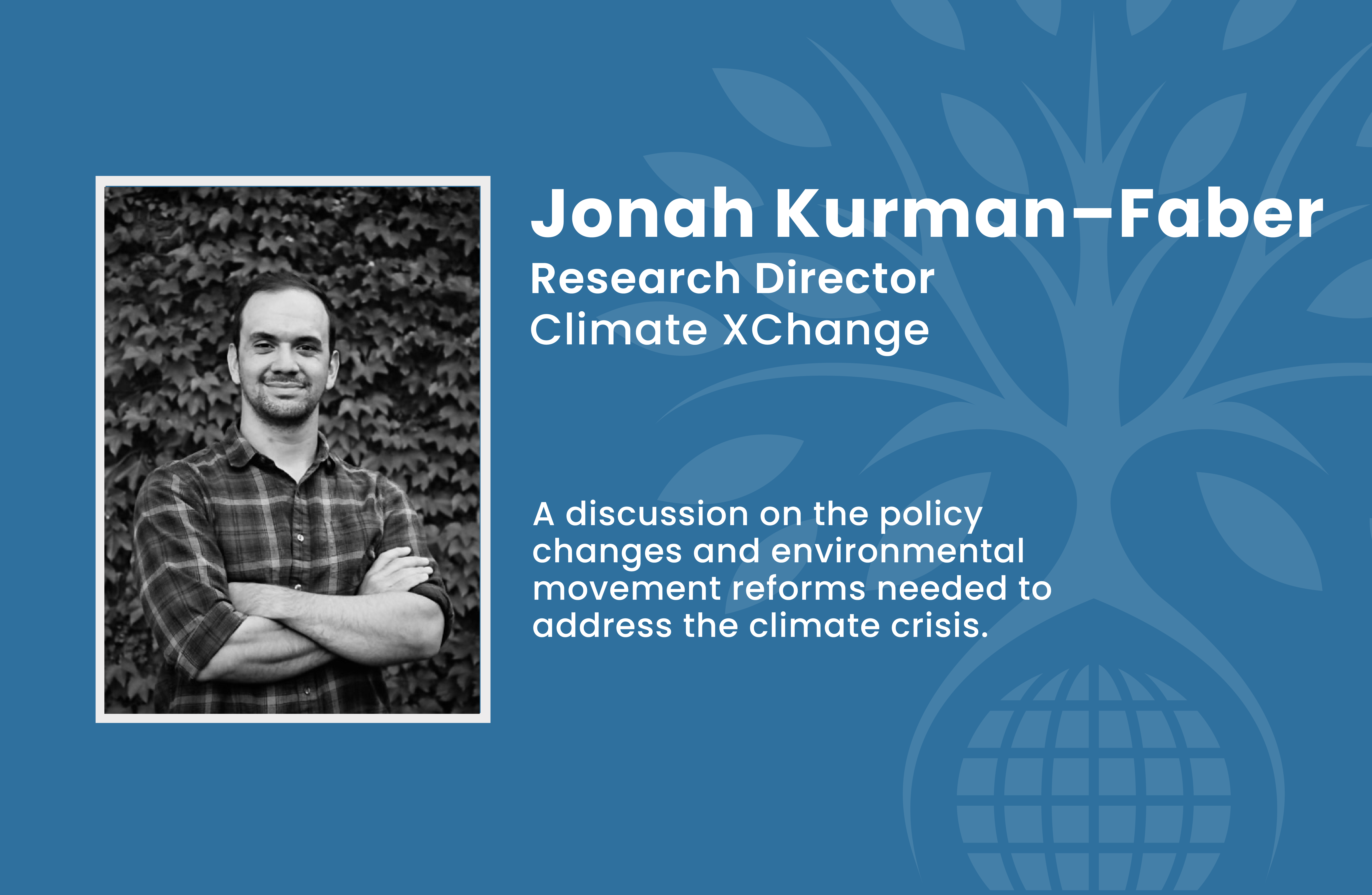 Interview
The Structural Transition We Need: An Interview with Jonah Kurman-Faber
Freddie
Kerr

As the climate crisis continues to worsen, climate-related anxiety around the globe is reaching an all-time high. This angst is fueled by two main questions: what are the sweeping policy changes the planet requires and how can populations around the globe bring about these changes? To develop a better understanding of what tackling the climate crisis actually entails, we spoke with Jonah Kurman-Faber, Research Director at Climate XChange and Fellow with the Global Center for Climate Justice. 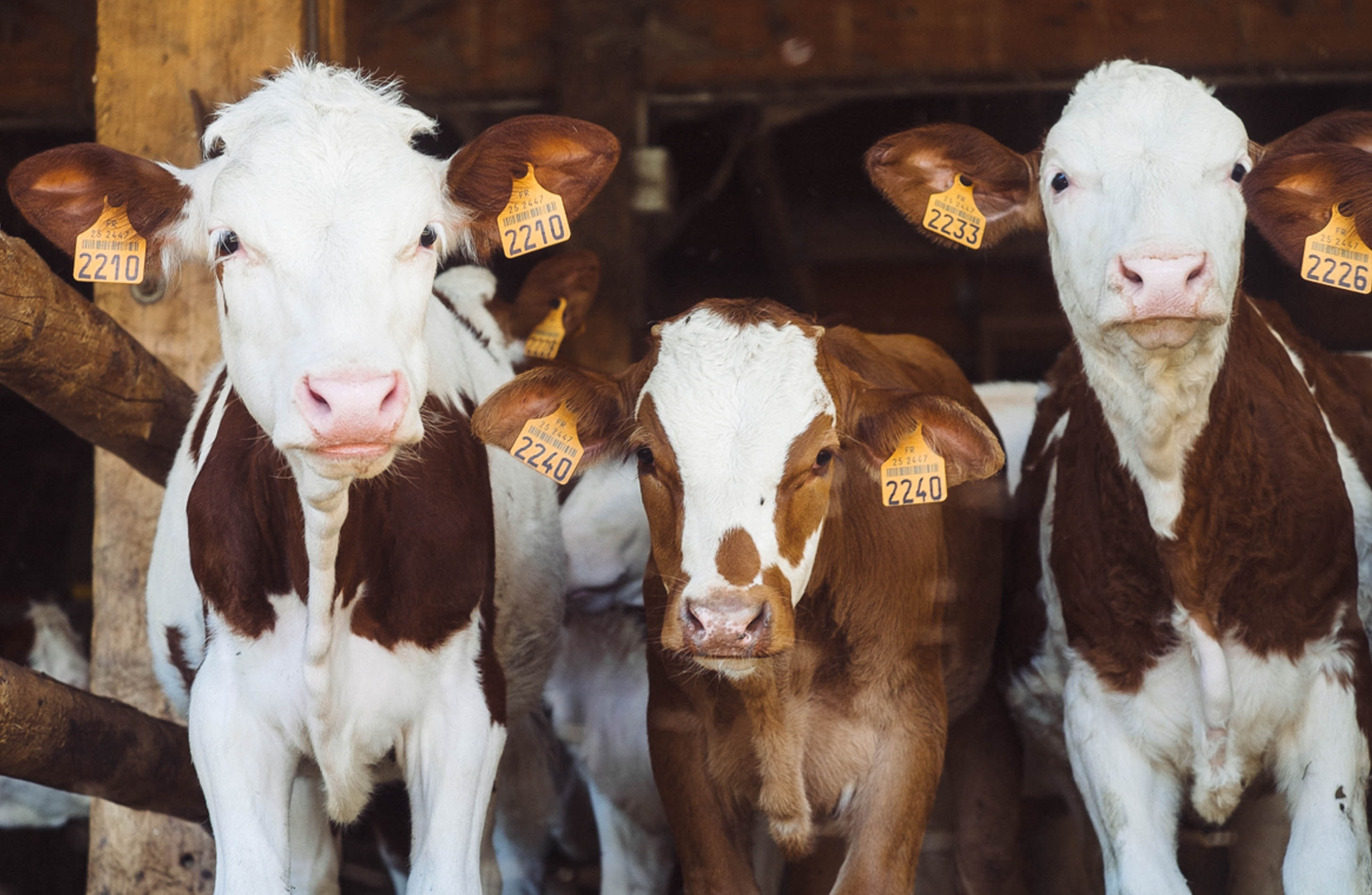 Report Summary
Factory Farming And Climate Justice: How A Green New Meal Can Transform Our Food System And Heal The Planet
Daniel
Faber

While the climate justice movement has highlighted the burning of fossil fuels and deforestation as being the leading causes of the climate crisis thus far, the role of agribusiness and factory farming in particular have received far less public attention. Yet, an upcoming report by Noa Dalzell entitled A Green New Meal: How Factory Farming Fuels Climate Injustice and What We Can Do About It reveals that factory farming in the United States is indeed a major driver of climate change and environmental injustice. 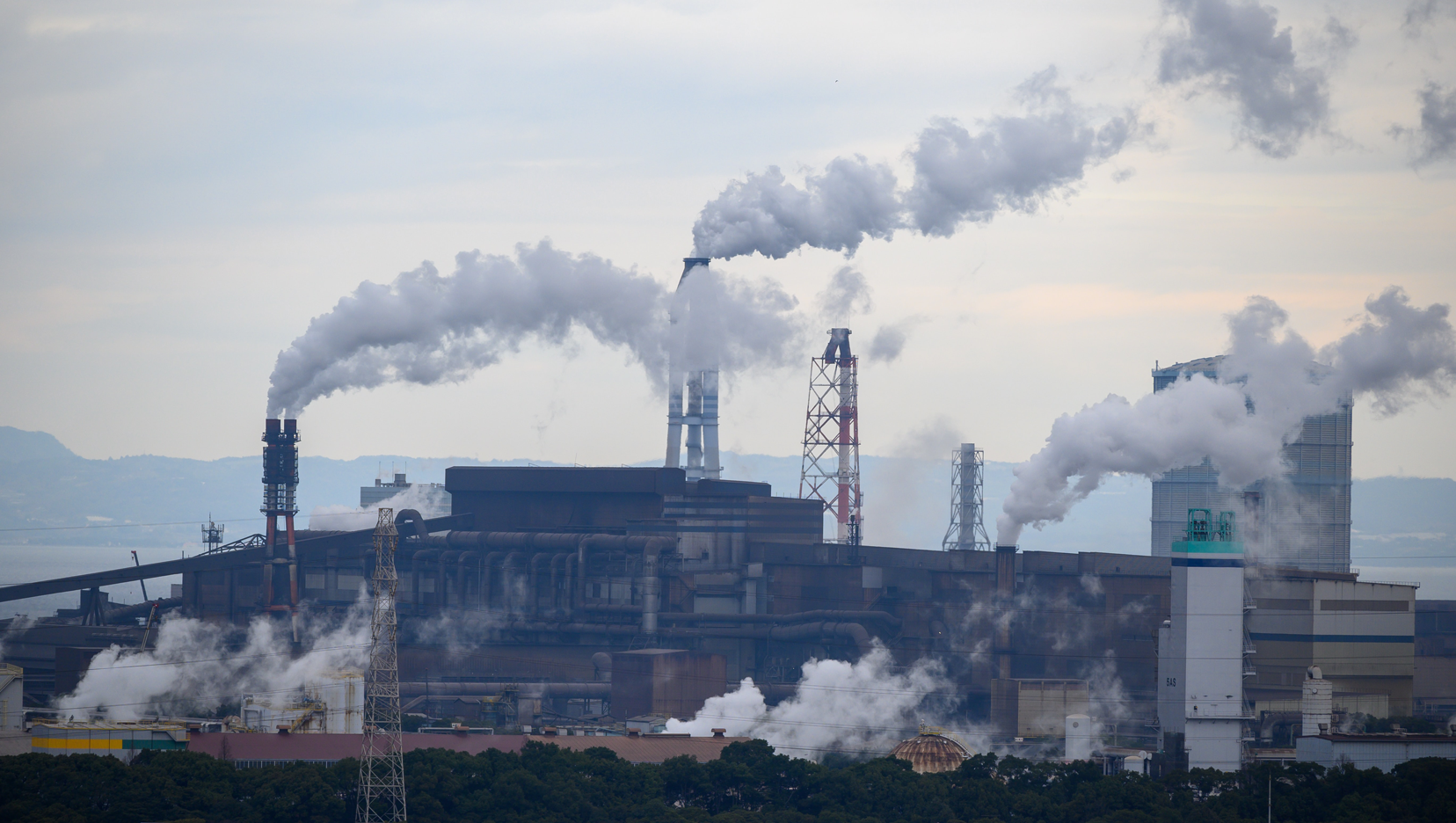 A massive document leak exposed how some of the world’s largest fossil fuel and animal feed-producing nations are lobbying to strip key findings from the latest IPCC climate assessment. The attack on climate facts comes just a couple weeks before the pivotal COP26, raising questions about the summit’s potential outcome during a critical juncture in international climate negotiations. 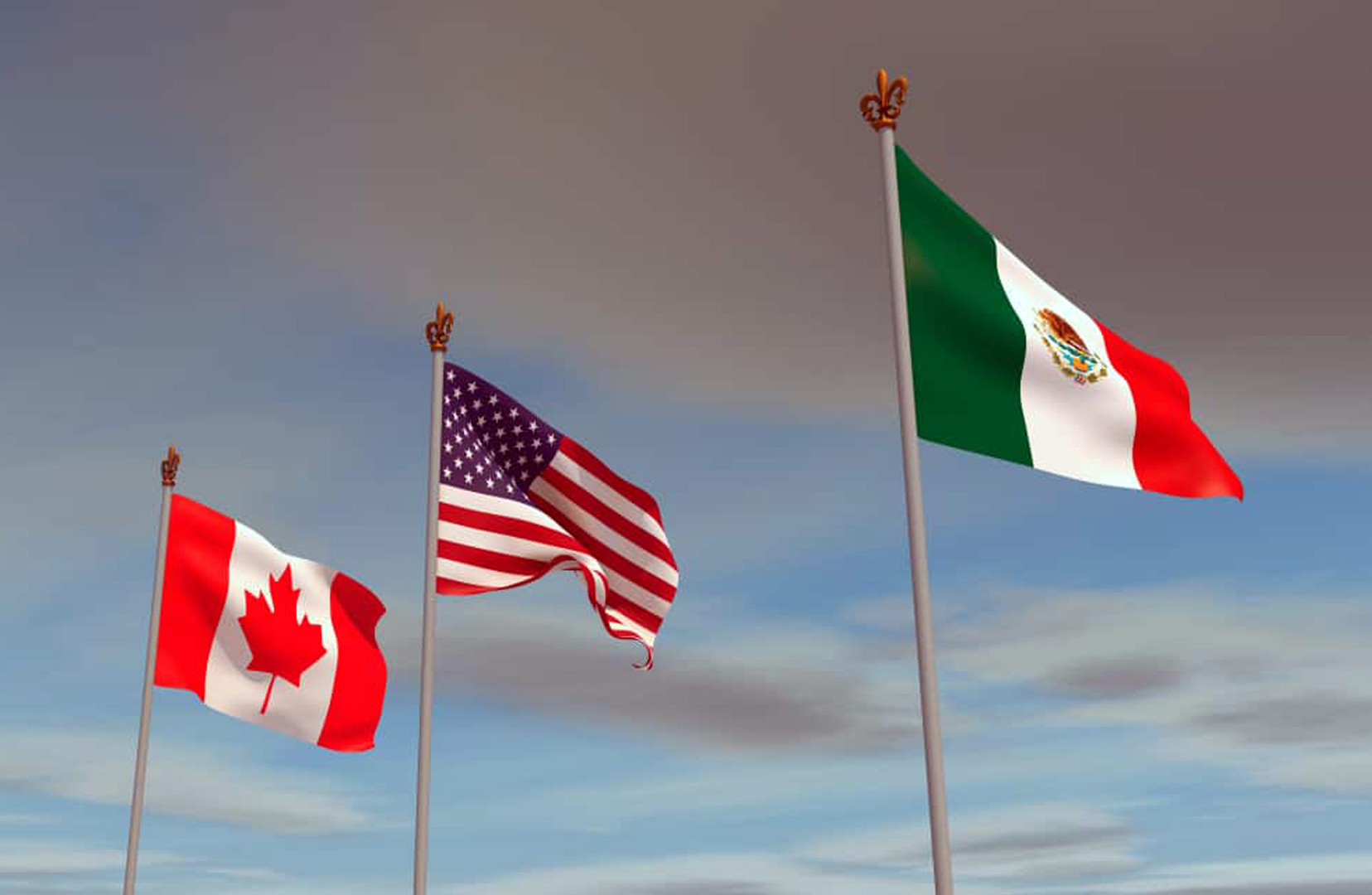 Report Summary
A Dangerous Climate for Free Trade: NAFTA, USMCA, and what they mean for People and the Planet
Caitlin
Vinton

The corporate-led neoliberal North American Free Trade Agreement (NAFTA) and its successor, the United States-Mexico-Canada Agreement (USMCA), amount to a dangerous attack on human health, welfare, and the environment. What can be done to reverse the damage already done and prevent further harm in the face of climate change? 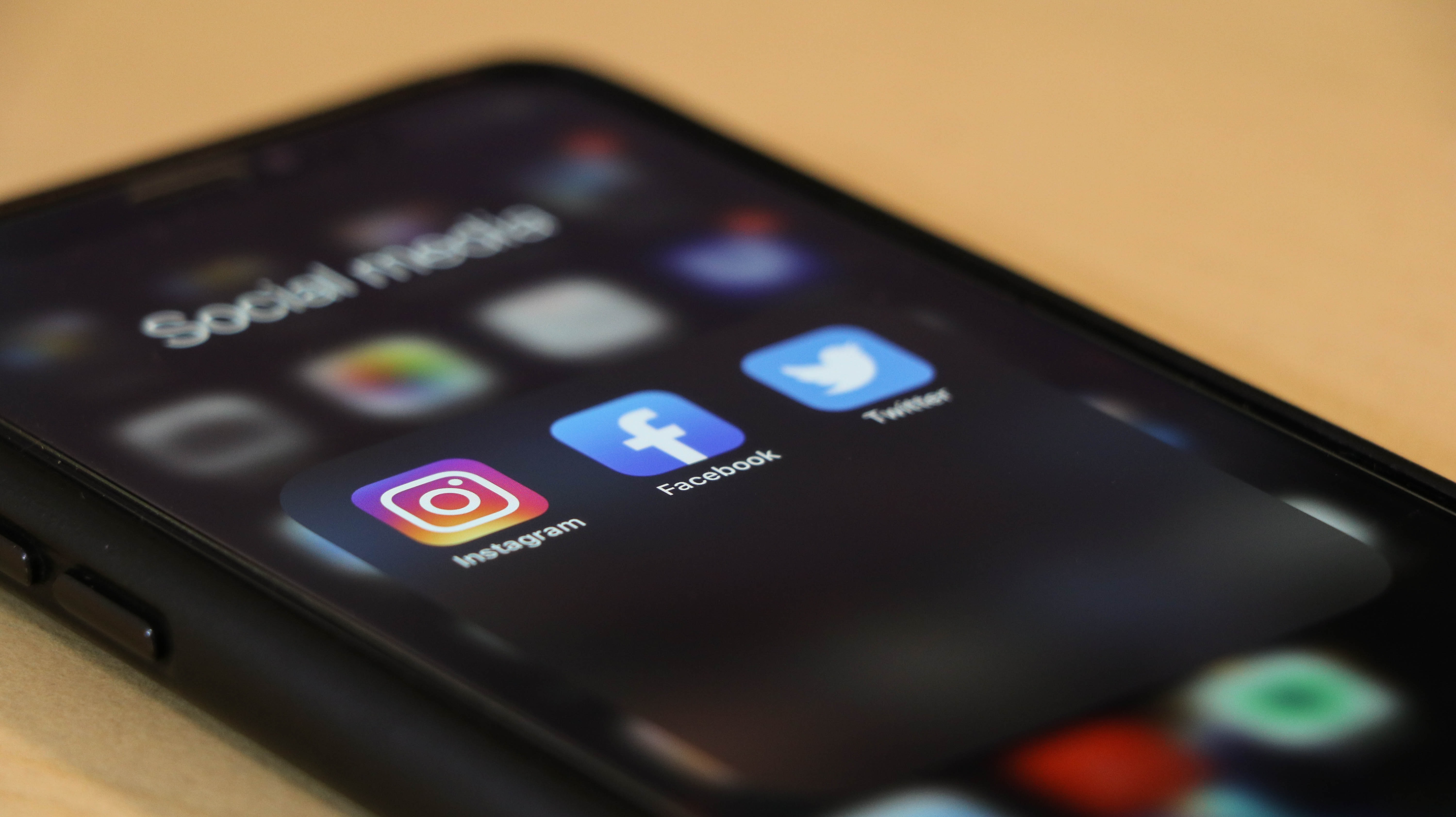 A recent groundbreaking report exposes the pivotal and dangerous role of social media in the spread of climate change disinformation and the fight against real and solutions-oriented information, specifically in the case of the February 2021 Texas blackouts. 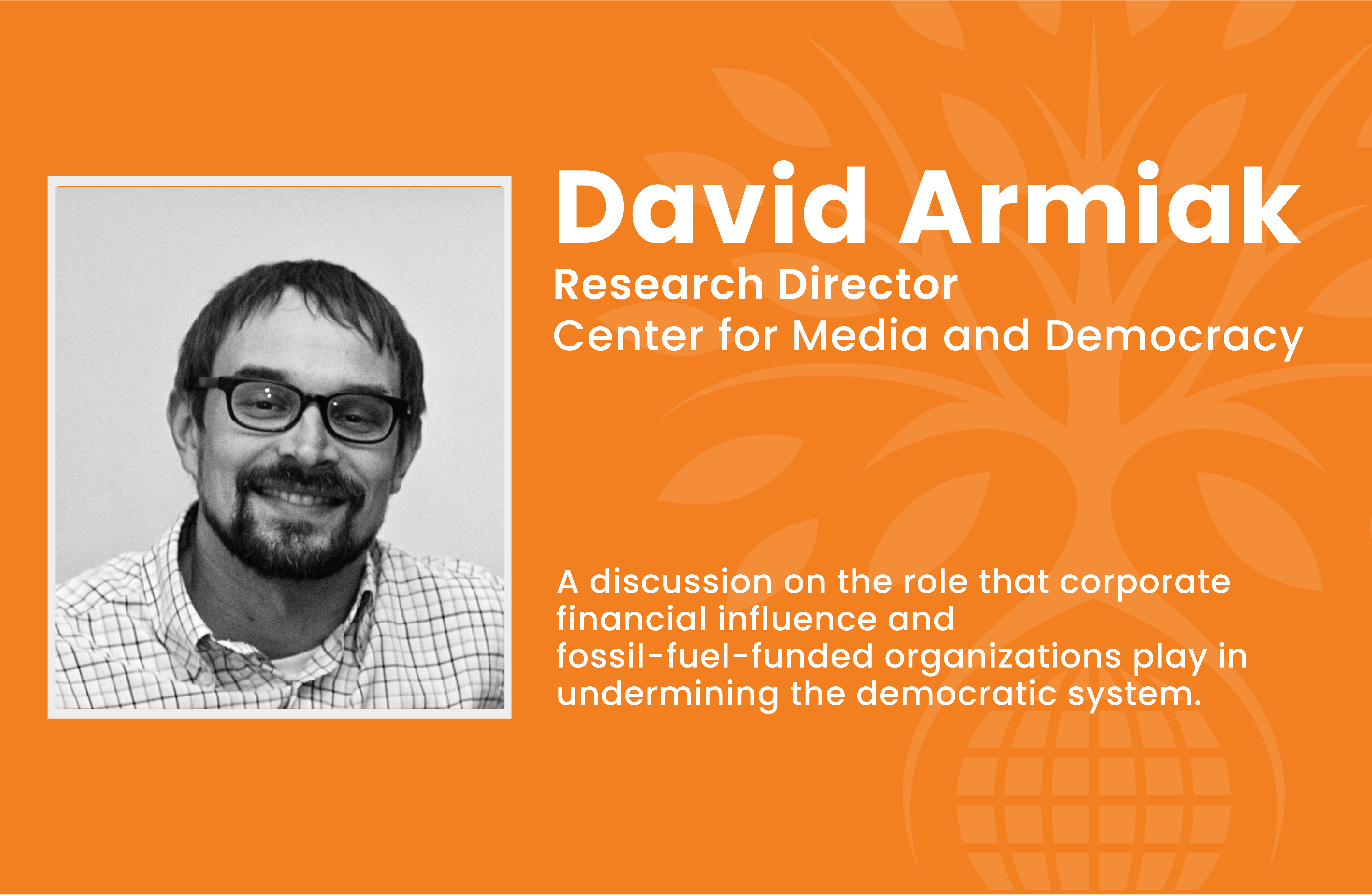 A discussion on the role that corporate financial influence and fossil-fuel-funded organizations play in undermining the democratic system. 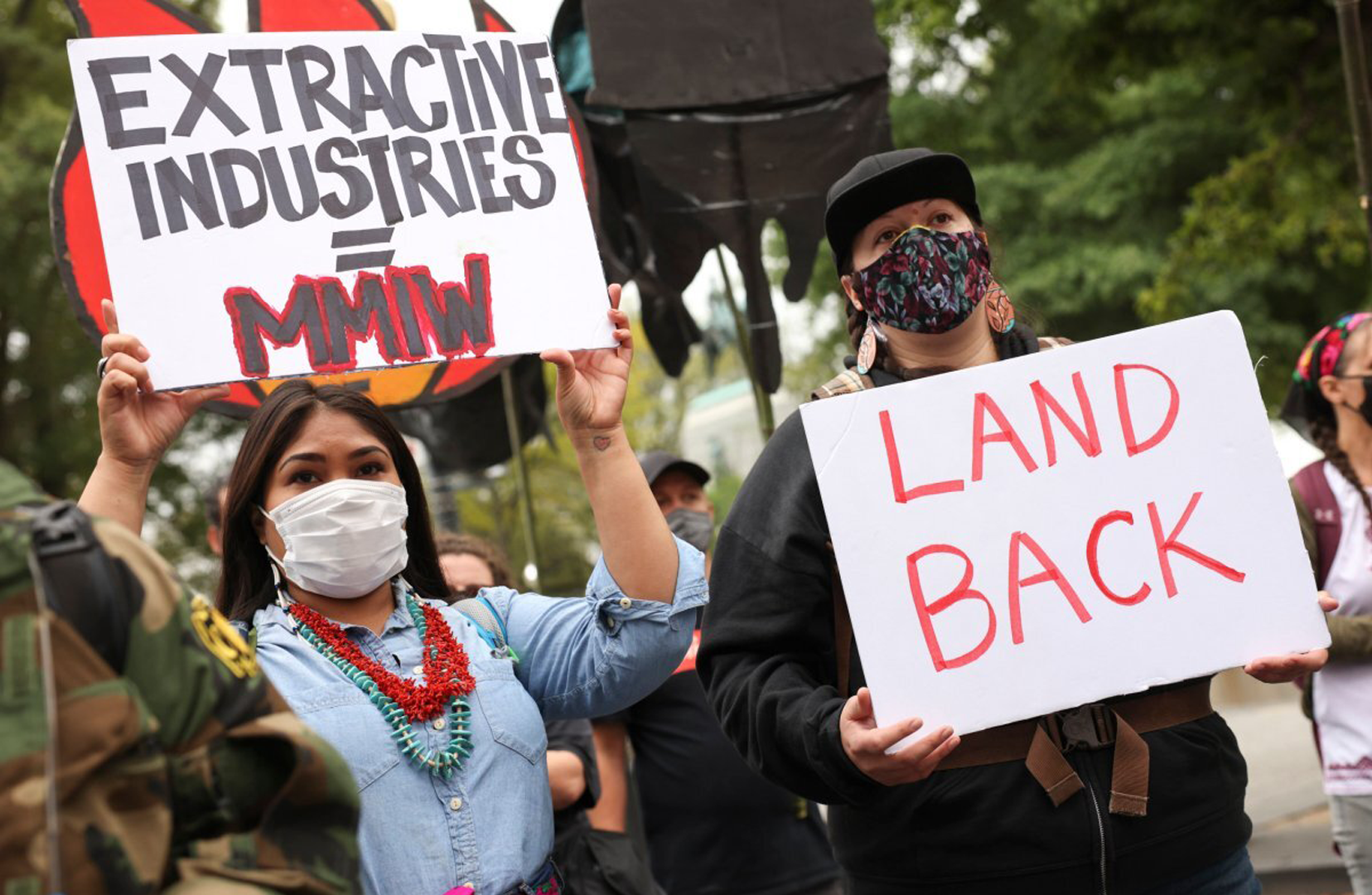 On October 1, Enbridge Energy’s Line 3 began to pump nearly one million barrels of oil per day, putting pristine waterways at risk and breaking federal land treaties with the Anishinaabe people of present day Minnesota. First proposed in 2014, Indigenous Peoples and climate justice activists have stalled its completion for seven years. Their fight continues against the destructive pipeline that has violated Indigenous rights, land, and waters. 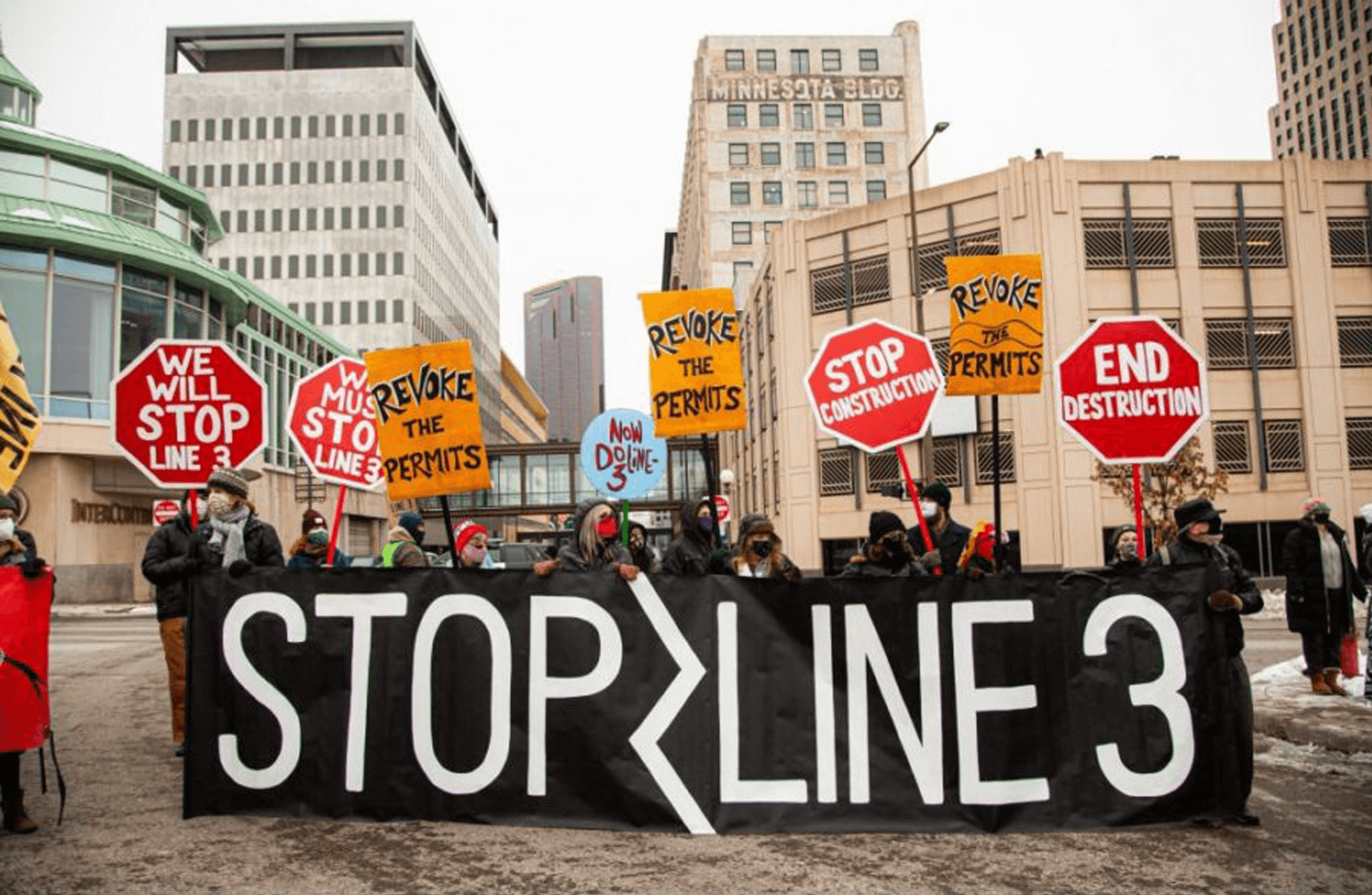 The construction of Enbridge’s Line 3 pipeline is an example of the fossil fuel industry’s ongoing attack on Tribal rights, Indigenous sovereignty, and all of our climate futures. Indigenous people are leading the fight for our future, and it is long past time to fall in line to follow them. 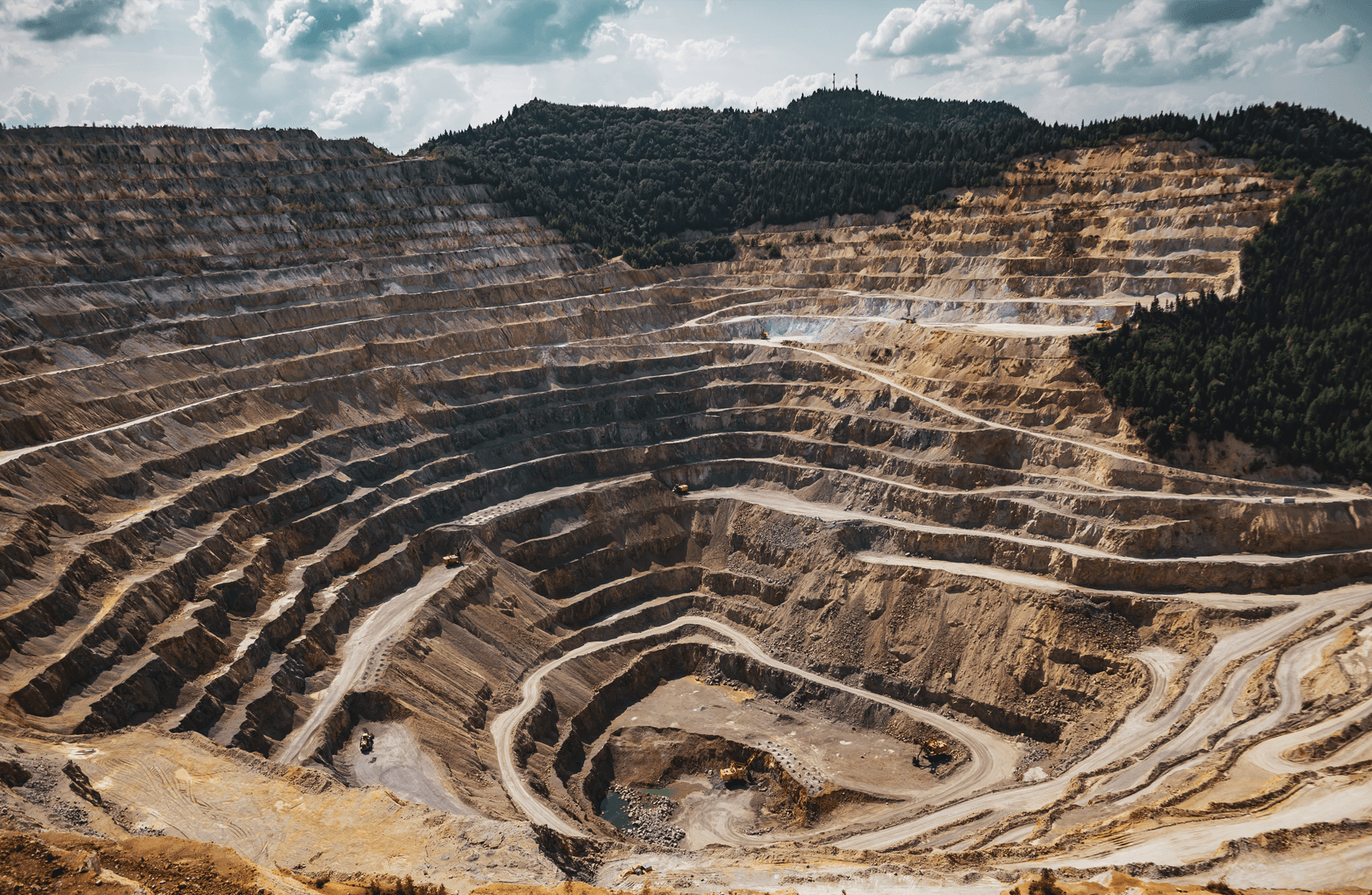 International institutions are not structured to account for the environmental catastrophe of neoliberal globalization. The International Criminal Court can alleviate this by making Ecocide a crime under their jurisdiction. 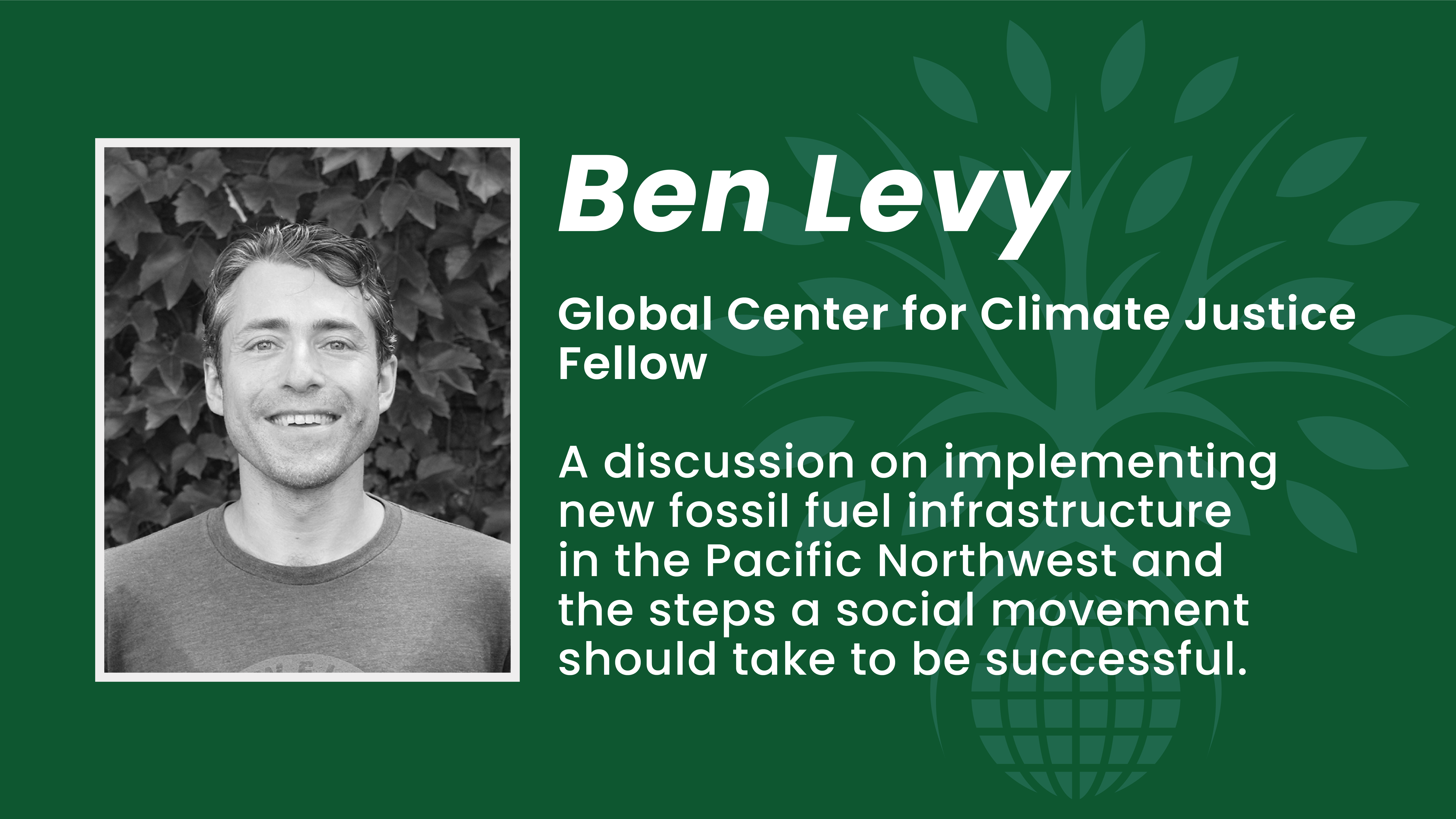 Recently, we spoke to Ben Levy on his recent efforts concerning the struggle over a proposed liquified natural gas refinery in Tacoma, Washington. Through his involvement in the resistance against this facility, he has witnessed firsthand how imperative it is to keep fossil fuels like natural gas in the ground. Ben sat down with us to explain how this struggle and its geographic location are critical to the climate justice movement. 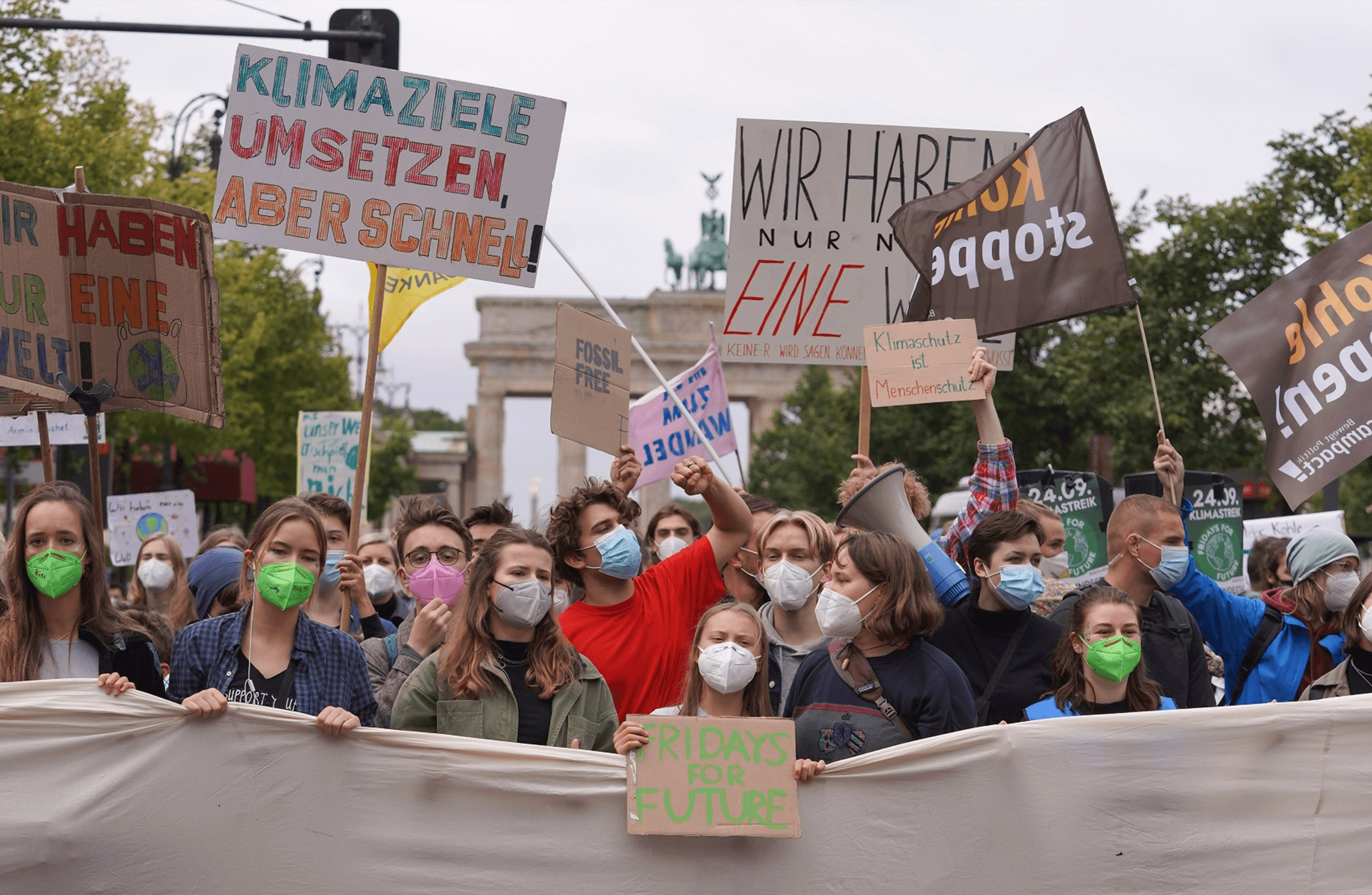 On September 24, hundreds of thousands of the world’s youth took to the streets across 1,500 cities and towns to voice their frustrations around the lack of urgency around climate change. After a year and a half of grappling with COVID-19, this year’s strike tested whether the CJ movement could maintain its momentum. 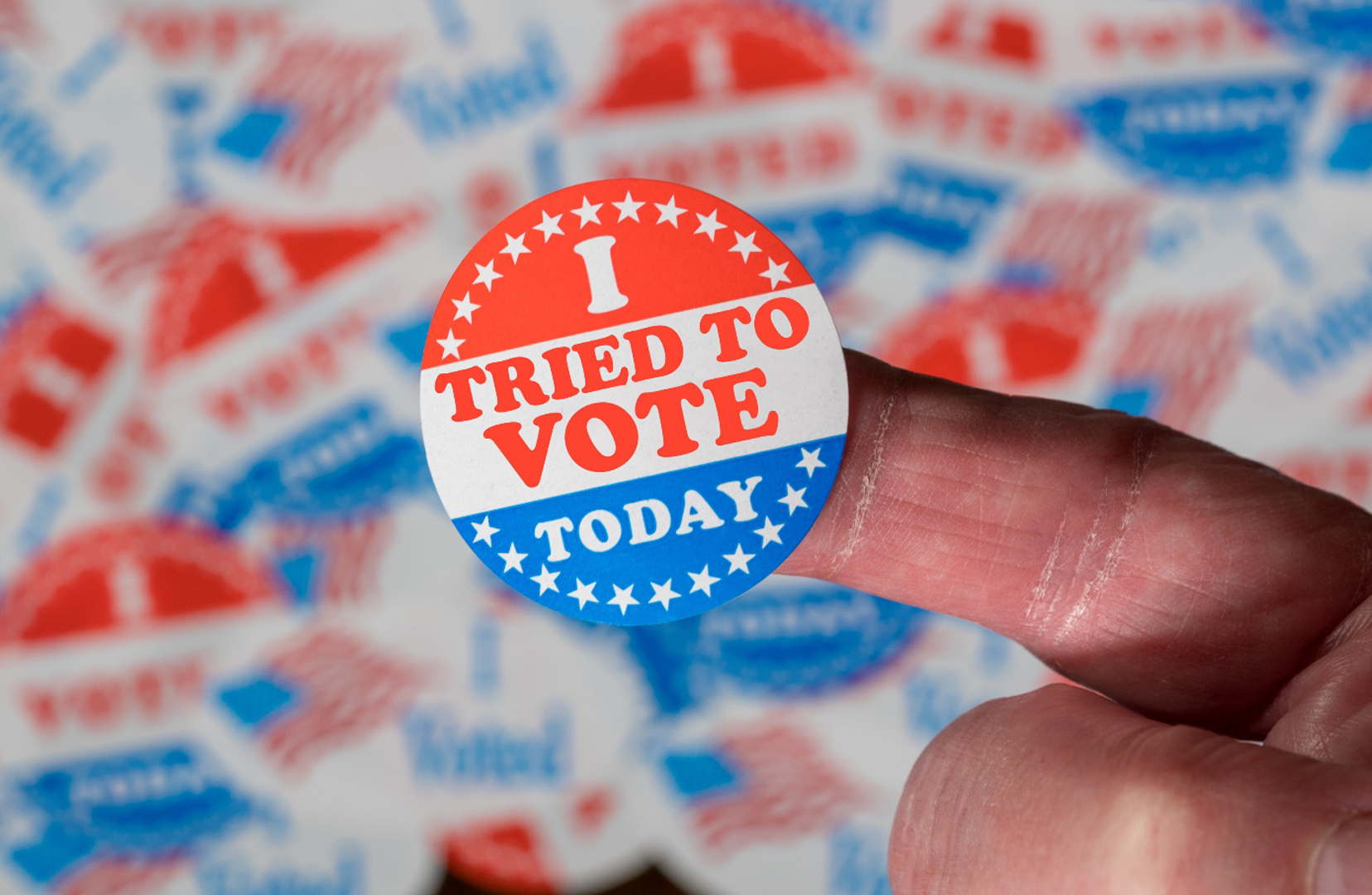 Voting is one of our most sacred and fundamental rights as citizens. However, this right is under assault — corporate polluters have launched a major attack on American democracy, suppressing the voting rights of targeted populations to hinder the passage of environmental legislation. 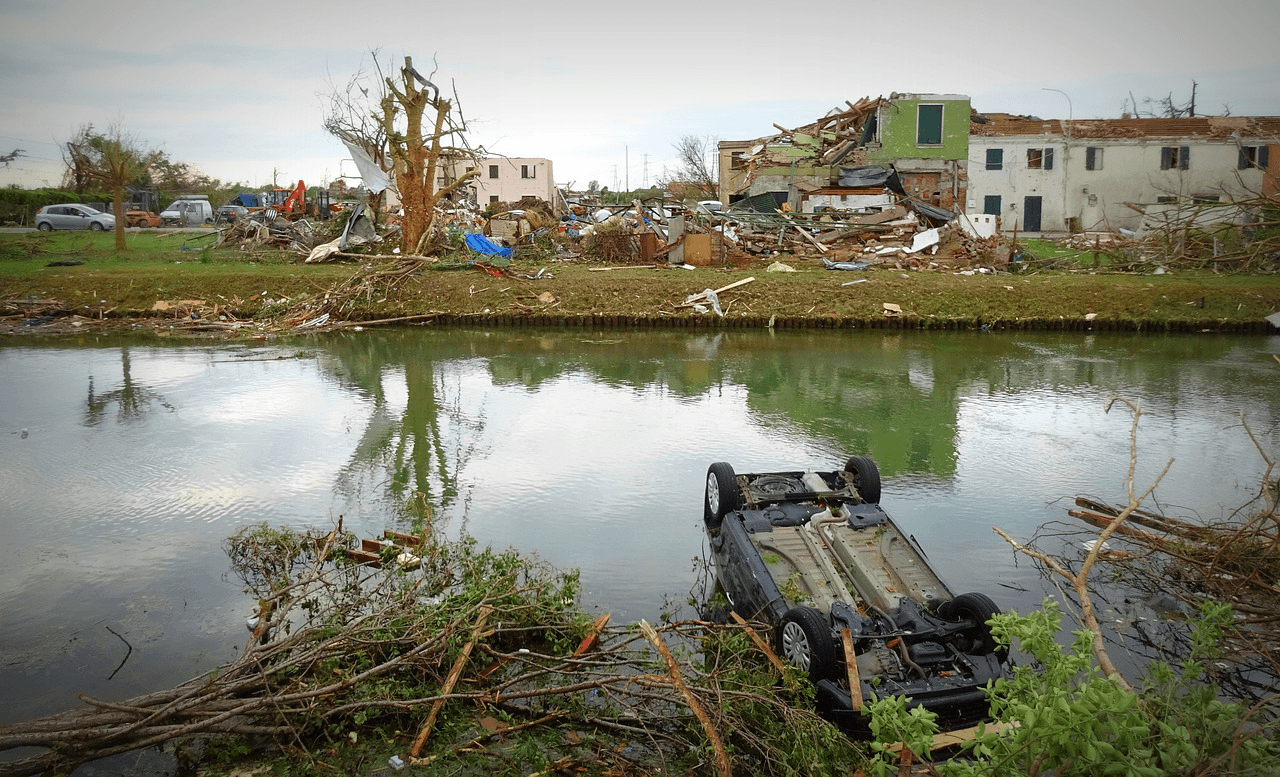 Extreme weather events across the globe are becoming both more frequent and more severe. Along with these disasters comes heightened uncertainty, anxiety, and trauma for people living in high-risk regions, and coastline communities are no exception to this rule. The chief culprit? Tropical cyclones. 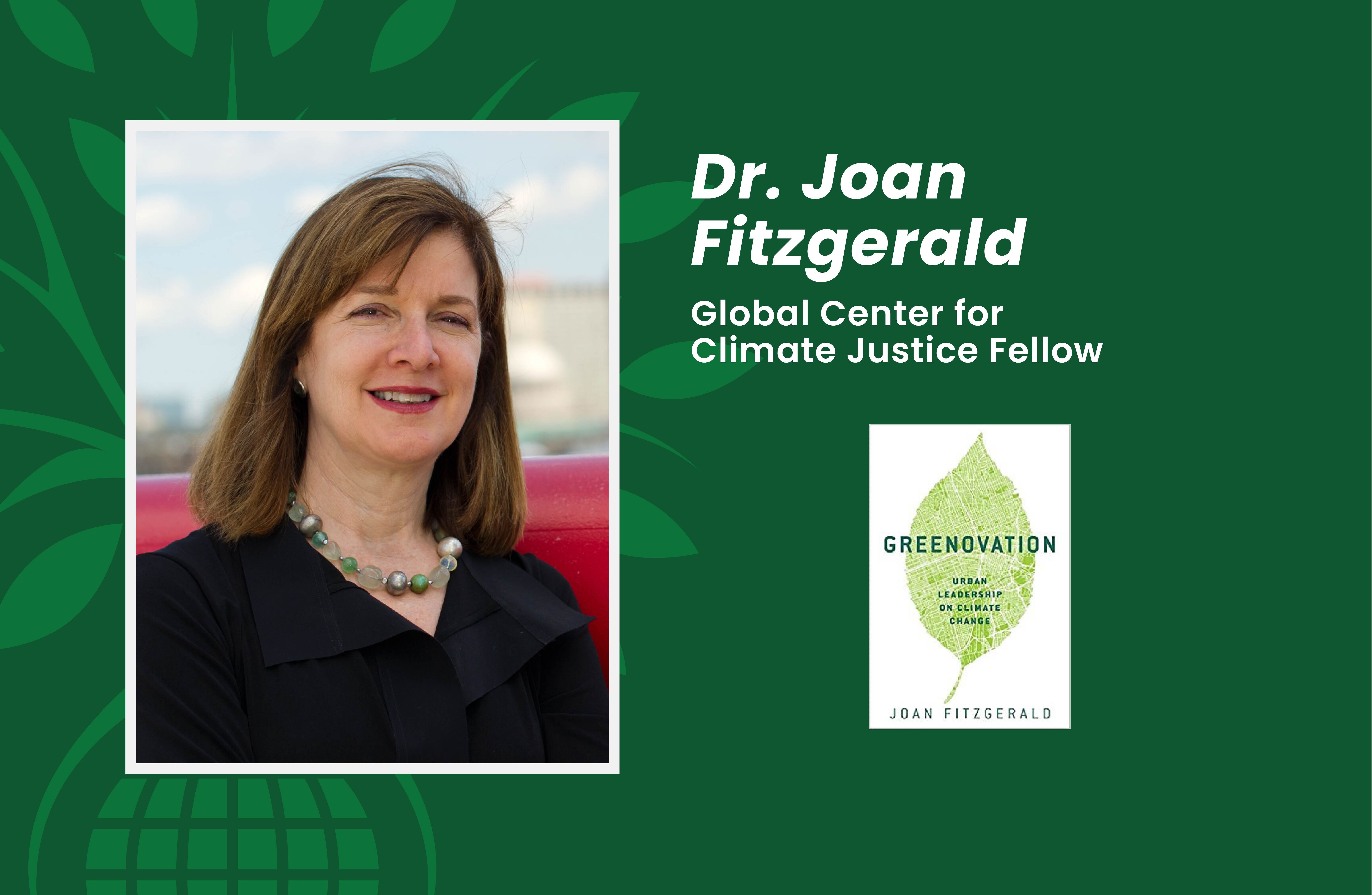 Joan Fitzgerald is a Professor of Urban and Public Policy at Northeastern University, and her research focuses on urban climate action and strategies for linking it to equity, economic development, and innovation. 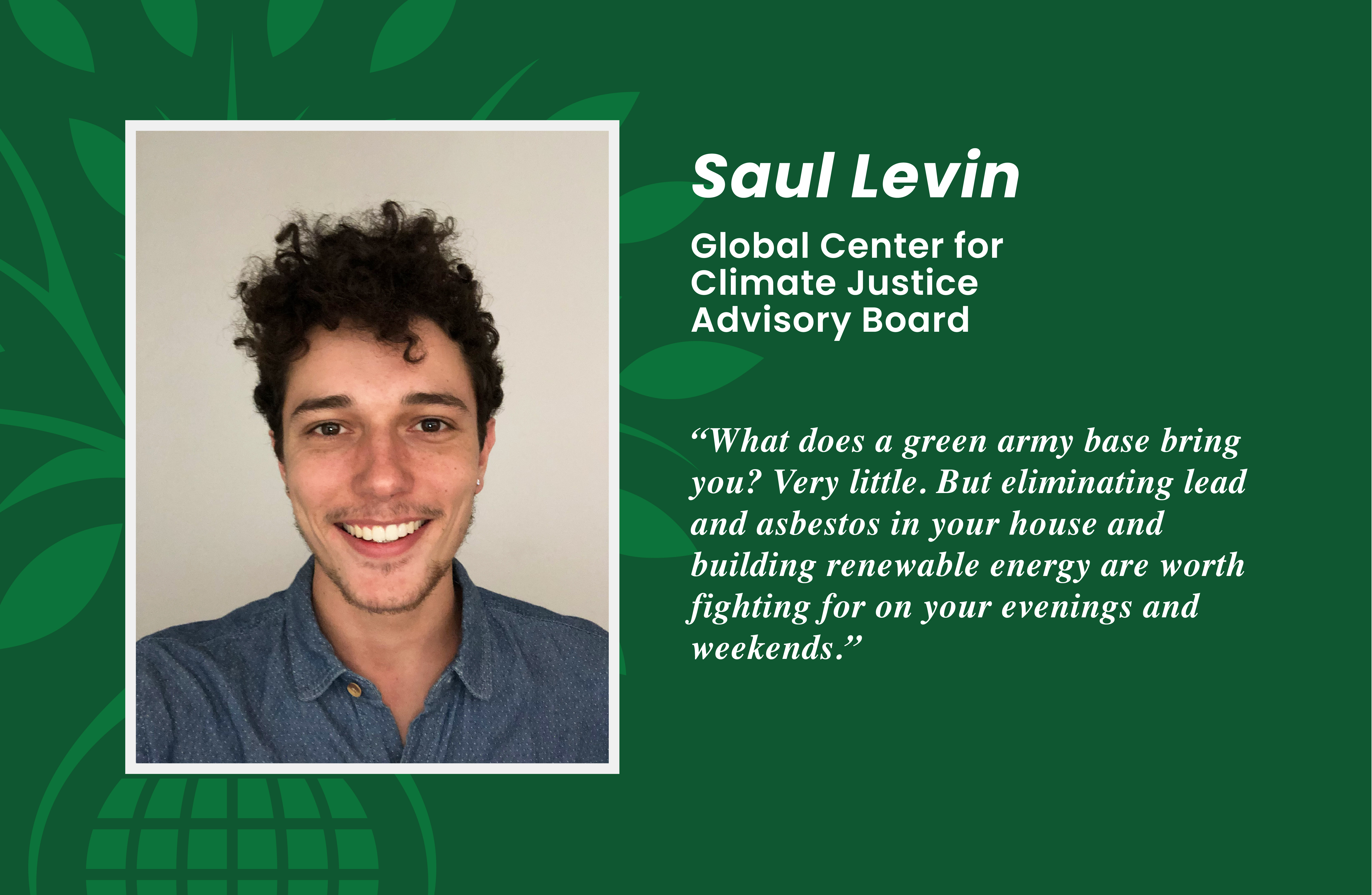 Interview
The Future of the GND: An Interview with Saul Levin
Mridhu
Khanna

Two and a half years ago, the Federal Green New Deal (GND) resolution ignited interest both nationally and internationally in a bold vision for actually achieving climate and equity. 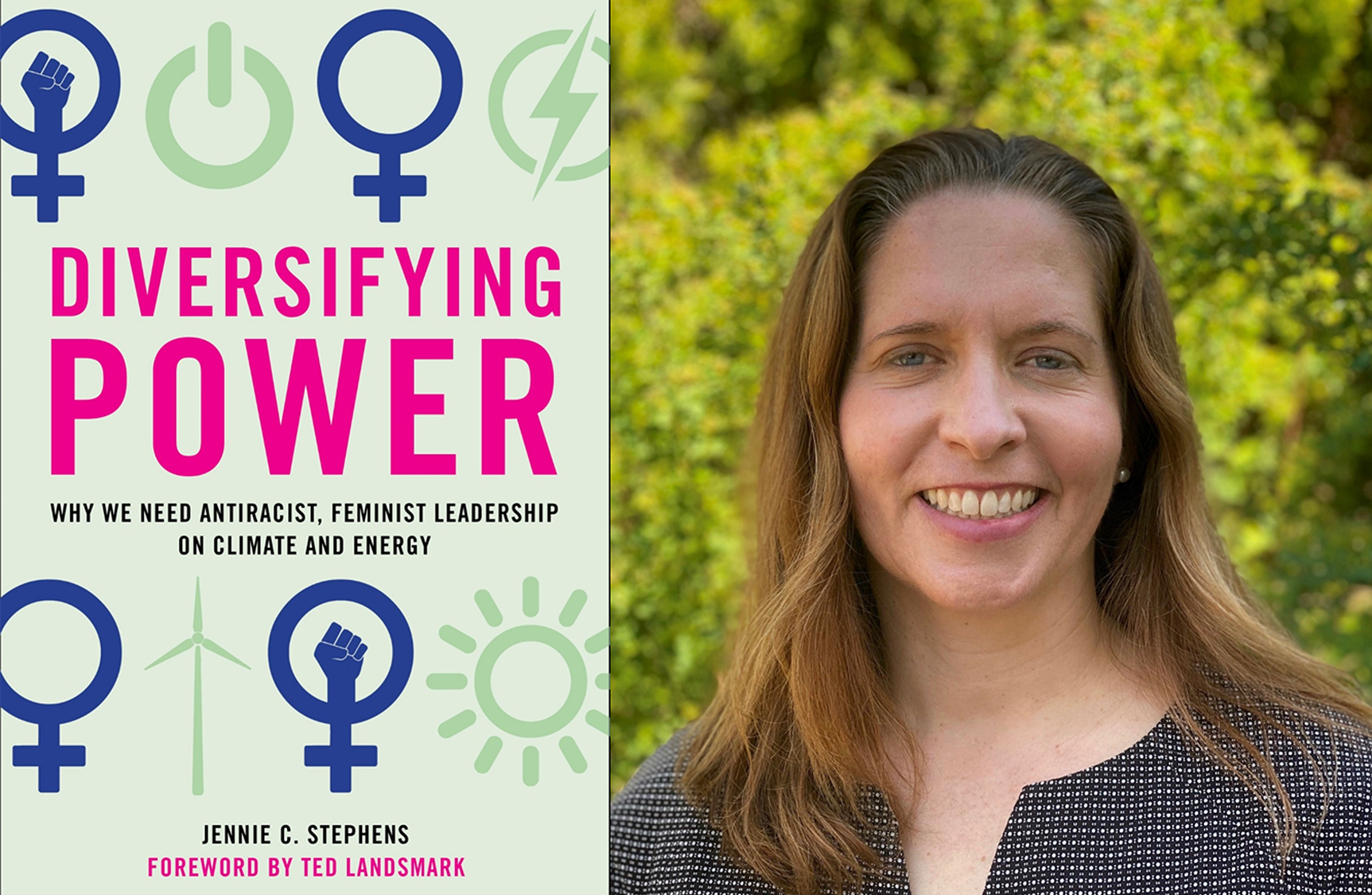 Dr. Jennie Stephens, Director of the School of Public Policy and Urban Affairs and the Dean’s Professor of Sustainability Science & Policy at Northeastern University, discusses her research, teaching, and community engagement focus on integrating social justice, feminist, and anti-racist perspectives into climate and energy justice. 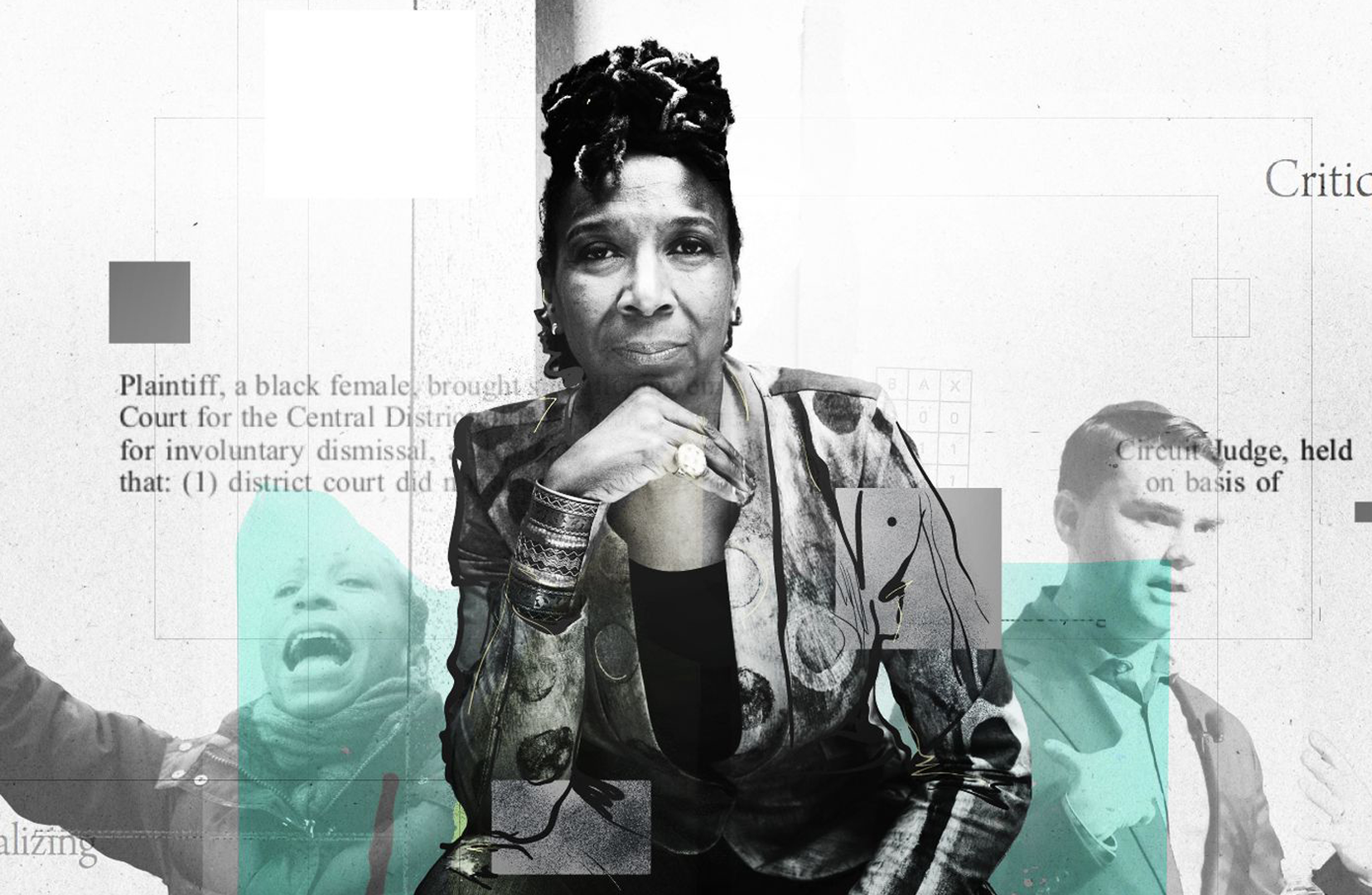 What exactly is intersectionality? A term coined in 1989, intersectionality has been used in the climate justice movement to describe the relationships between individuals’ unique identities and experiences, especially those of historically oppressed groups, and how they can influence real and positive systemic change.