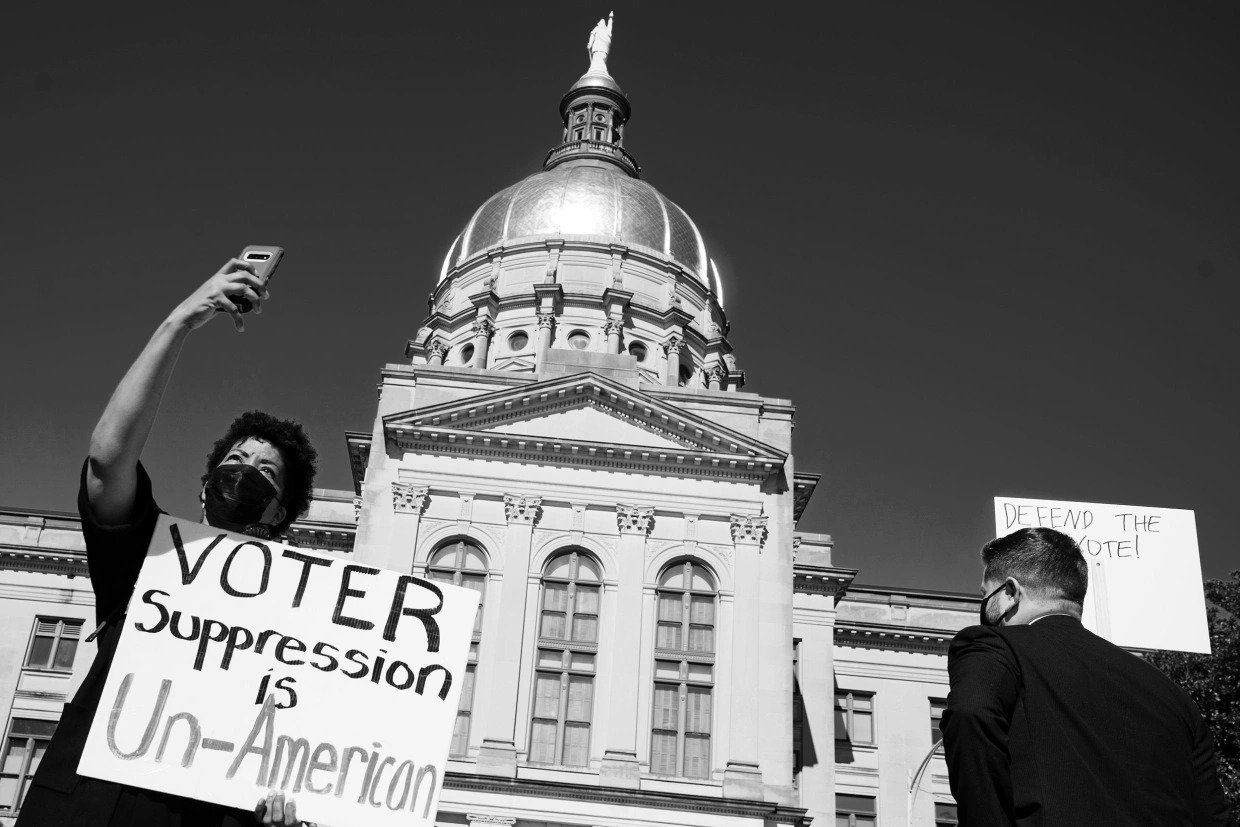 American democracy is under assault. In 2021, more than 440 bills across 49 states were introduced that were designed to hijack the election process and suppress the right to vote. These bills were targeted primarily at people of color and young people. Some 18 states actually passed 34 laws restricting access to voting. This assault is spearheaded by the Republican Party, conservative billionaires, and the most environmentally destructive corporations on the planet. Termed the polluter-industrial complex (PIC) by Senior Research Fellow Daniel Faber, these are the sectors of Big Business that would stand to profit the most from a weakening of environmental regulations, public health and safety measures, and climate change legislation.

The polluter-industrial complex’s central role in organizing and financing the assault on voting rights and American democracy cannot be understated. Nevertheless, the role of the PIC is rarely discussed in public discourses and/or standard media accounts. Instead, the focus is typically on the actions of Donald Trump and his more “extremist” Republican supporters, including the more explicitly racist and authoritarian wing of the Party. However, such accounts ignore the role of corporate power working behind the scenes to steer the actions of the Grand Old Party (GOP). The PIC is providing the money, institutional support, and the political playbook for enacting a multifaceted, targeted and effective rollback of voting rights. And the GOP is expected to carry it out.

If the assault on voting rights were not a strategic objective promoted by the PIC, then Republicans would not be implementing the assault. Voter suppression enables business-friendly politicians whose campaigns are bankrolled by corporate polluters to gain control over the state and thwart movements for environmental and climate justice, economic equality, women’s rights, and racial justice. In this respect, the corporate assault on our democracy, social justice, and the planet go hand in hand. It is part of a larger end-game to dismantle democracy and then reconstruct America’s political institutions into an OIL-igarchy, a new system of governance that better serves the economic interests of corporate America and the polluter-industrial complex.

The reason for this assault is simple: Indigenous peoples, Asian-Americans, Black and Brown communities and youth are at the forefront of the struggle for environmental protection and climate justice. To politically disempower these communities of color serves the economic interests of the polluter-industrial complex and the political interests of the Republican Party (and some enabling corporate Democrats as well, such as West Virginia Senator Joe Manchin).

As we outline in our new report entitled, Voter Suppression, Climate Justice, and the Polluter-Industrial Complex: How the Corporate Assault on American Democracy and the Climate Are Connected, we show that people of color are more likely to vote for pro-environment candidates. Consequently, candidates of color elected to represent communities of color have the strongest pro-environment and pro-climate action records in Congress. The PIC has a vested interest in reducing the political power of these sectors of American society.

Efforts by the polluter-industrial complex to roll back voting rights is further fueled by the recent successes of the environmental justice (EJ) and climate justice (CJ) movements in halting the building of new pipelines, refineries, industrial facilities and other fossil fuel infrastructure in states all across the country. The political disempowerment of these movements serves the political-economic interests of major corporate polluters. In this issue of the newsletter, we take up the role played by corporate polluters in silencing the voices of historically oppressed communities of color, progressive youth, and White working-class families who care about the climate crisis. We must protect the right to vote and our democratic institutions if we have any hope of saving the planet.