support us
What Does it Take to Lift a Giant? The Ants & The Grasshopper Review
Katya
Forsyth 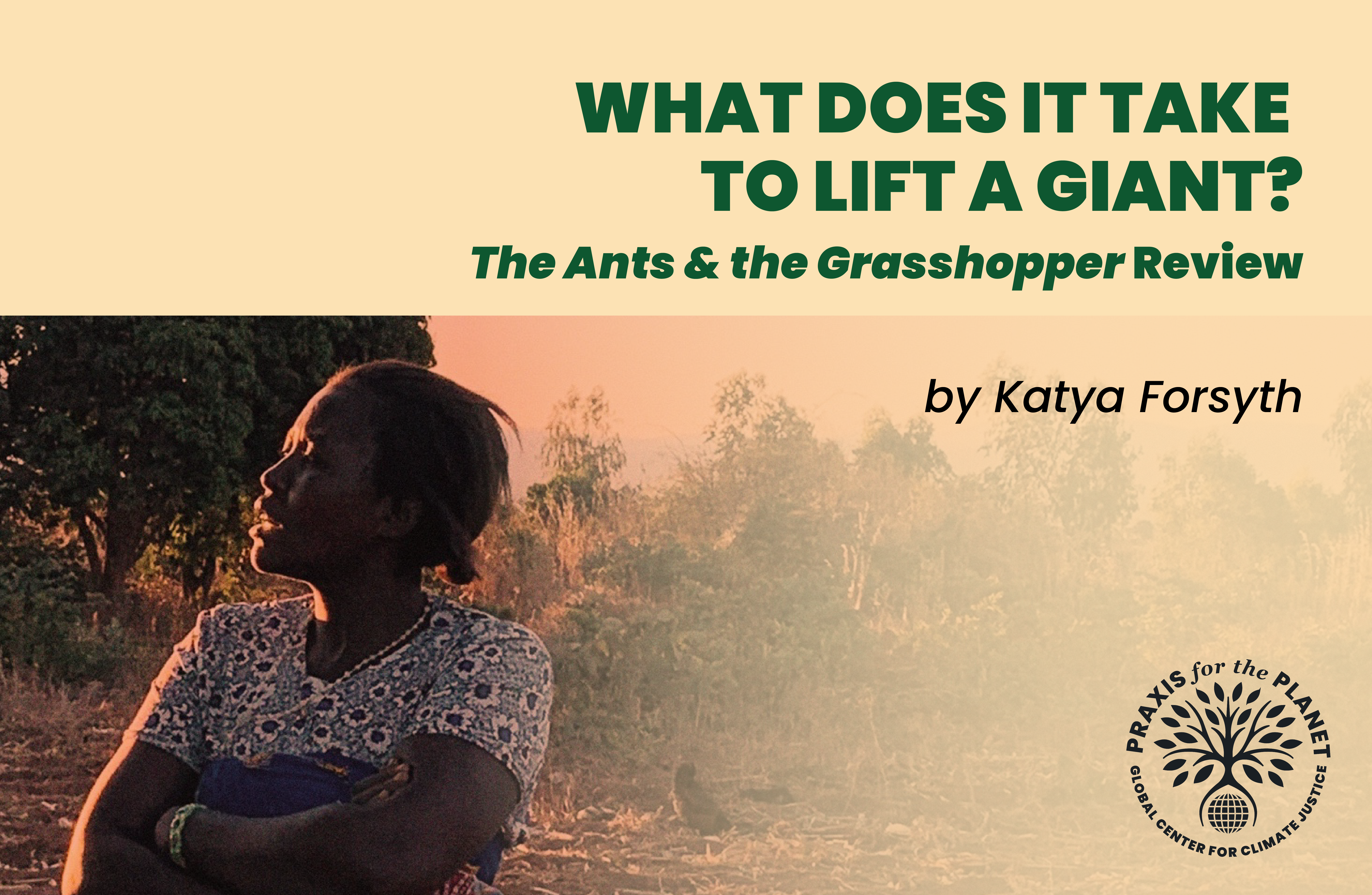 “The Ants and the Grasshopper” is a movie that made me feel held—that was the first thing I wrote down, just fifteen minutes into the film. Produced by Raj Patel and Zak Piper, and narrated by the main character, Anita Chitaya, it avoids both the pity trap and exceptionalization endemic to many Western films about African people. While watching the film, I had the rare pleasure of simply enjoying and reflecting on the story, instead of cringing every couple of minutes—an unfortunately common response to the genre of international environmental documentaries. Patel and Piper consciously worked to transition “from a hierarchical mode of storytelling to an accountable one”, mirroring the transition from subject to participant that the planet needs in tackling climate change. The film begins and ends in Bwabwa, Malawi, bookending Anita’s investigation into global transformation with stories of her community and others’ personal transformations. Anita’s work reminds the viewer that climate action begins where you are living. You do not need permission from anyone else to start.

Soils, Family, and Healthy Communities (SFHC) is the organization that first taught Anita about climate change. Anita is a strong woman—she leads her community through care, proactive communication, and cooperation with others. She is inspiring because of her relationships, knowledge, empathy, and most importantly, uncanny knack for getting people to change their ways. While she and her community are working through the negative impacts of climate change, she is also working to increase gender equality by educating the men and boys in her village about cooking, growing food, and being in partnership with their wives. Her son wants to be a pilot. She reminds him that even if he goes to America to become a pilot, he will still be contributing to the climate change that is destroying their harvests in Malawi. Anita is imparting the fact that the climate crisis knows no borders to her children.

For the first twenty minutes of the film, Anita is the only speaker, so it is a shock when Patel’s voice enters to ask her, in English, if she would like to go to America. She says yes; “We will find out why Americans aren’t taking climate change seriously.” A very good question—one that Western academics and the media are obsessed with asking over and over. She and her friend, Esther Lupfaya, a co-founder of SFHC, embark on this journey together.

Anita and her friend’s first visits are to classic family farms, straight out of the imaginaries of white Americana. What follows is essentially a montage of white farmers telling these Malawi women that they just do not think about climate change. It’s a political issue, they say, over and over. These people are living in the clouds, unable to comprehend that they might already, or at least very soon, be facing the same problems as Anita’s community - drought, flooding, and crop failures. The condescension in their voices and mannerisms is suffocating. They are humbled to hear of her struggles, noting that their own problems are nothing in comparison. And they are sorry for that. While Anita is very polite, you can feel her resisting the urge to roll her eyes.

That is the problem with white exceptionalism in the United States, isn’t it? It’s so easy to pity others’ problems, but near impossible to realize that their problems might be yours as well. After one of the farmers’ wives and daughters serve dinner, Anita observes that “In Bwabwa, men give instructions and try to tell you what to do. It seems in America, it’s not so different. Men everywhere are worried about women becoming as powerful as them.” The farmer’s son does not know how to cook, and does not plan to learn.

At this point in the film, I was frustrated. “Both sides” started to feel like such a tired trope—why bother? If social change has been made historically by a small group of committed people, what is the point of spending all this energy on dead weight? I wrote down a note: I want Anita to meet the Detroit Black Community Food Security Network (DBCFSN). Patel and Piper did not disappoint—the next scene opened on D-Town farms, one of DBCFSN’s locations. Finally, we now get to meet Americans who not only believe in climate change, but who say what they think instead of politely avoiding the truth. Malik Yakini tells Anita, “Our organization thinks capitalism and white supremacy is a terrible way of defining human relationships—and patriarchy as well.” These meetings feel like the beginning of a resolution, a promise that nothing lasts forever.

But these communities are the many, many ants that can lift the burden of the metaphorical grasshopper - climate change, capitalism, white supremacy - feeding themselves and freeing the world in the process. Anita laughs and jokes with the women at the Black Dirt Farm Collective, and the joy of being on the same team in the same struggle shines through. I think that’s the real gift of this movie, and of the wonderful Anita Chitaya. She does not need accolades. Her power is showing people how to be on the same team: how to work together. It does not matter if it is a spouse or a stranger on the other side of the world. Humanity’s greatest fight is here, and she reminds us of the truth: