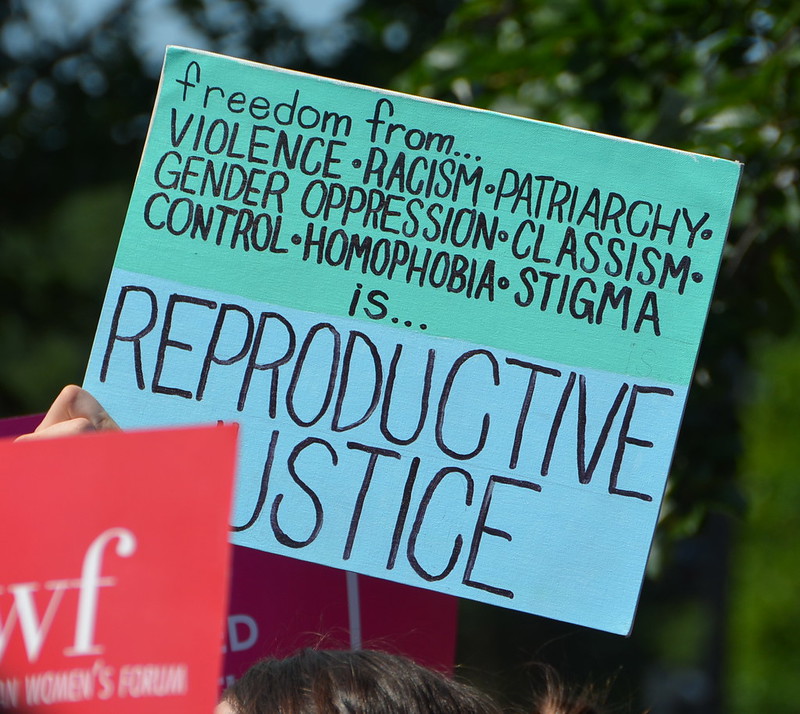 The leaked draft opinion on Roe v. Wade threatens to end legal access to abortions in many U.S. states, and casts a threatening shadow over the potential for future abortion restrictions nationwide. This development is the culmination of a decades-long neoconservative strategy to end abortion and roll back women’s rights to control their own bodies. Yet, prior to the 1970s, the Republican party was majority pro-choice. The Grand Old Party (GOP) adopted an anti-abortion platform for the first time during Nixon’s presidential campaign in an attempt to appeal to Catholics (who at the time were mostly Democrats). However, what was intended to be a short-term ploy to win a presidential election soon became a long-term strategy to win over and unite largely apolitical Catholics and Evangelical Christians and create a new base of support for the GOP.

President Nixon went on to nominate Antonin Scalia as Supreme Court Justice in 1972. Scalia became one of the most right-wing justices in the history of the Supreme Court and had very close ties to the Federalist Society. The Federalist Society was formally founded in 1982 when around 200 conservative students and professors met at Yale Law School and began to craft the language and organizational structure in support of constitutional originalism. Through ample donations from major corporations and conservative millionaires, the group grew into a multimillion-dollar organization that seeks to reorder “priorities within the legal system to place a premium on individual liberty, traditional [conservative] values, and the rule of law. It also requires restoring the recognition of the importance of these norms among lawyers, judges, law students, and professors.”

Other right-wing law centers were soon established, perpetuating oppressive systems of power and restricting equality to privileged White males by framing civil rights and gender equity as an attack on religion. One such center is the American Center for Law and Justice (ACLJ), created by Christian televangelist Pat Robertson in 1990, which is responsible for the redaction of abortion rights in the Kenyan Constitution. The Honest Elections Project, tied to the Federalist Society, takes constitutional originalism even further to block and oppose mail-in ballots and reforms that make it easier for working people of color to vote. The fossil fuel industry has also paid such organizations to spread climate disinformation. Between 1997 and 2015, ExxonMobil alone provided over $9.2 million to the Heritage Foundation, Federalist Society, American Legislative Exchange Council, American Enterprise Institute, and Competitive Enterprise Institute.

The influence of money in politics has only intensified since the Citizens United v. FEC case, which rules that candidates are allowed to receive money through super PACs and dark money groups. These mechanisms allow a minority of corporate-backed elites to influence federal elections and the Supreme Court nomination process in order to maintain their power and profits. The fossil fuel industry has also heavily donated to senators who voted to confirm the Supreme Court Justices that signed the leaked draft opinion to curtail abortion rights. They also share the goal of restricting the capacity of the federal government to take action on climate change.

Throughout the years, the Federalist Society, along with the far-right movement, have incrementally expanded their scope of influence and power. An example of an important victory for the organization occurred in 2014 with the ruling on the Burwell v. Hobby Lobby case. During the Obama administration, the Affordable Care Act mandated that insurance cover contraception. However, the owners of Hobby Lobby Stores Inc. refused to provide contraceptive care, stating that it violated their religious beliefs. Hobby Lobby also equated birth control to abortion, although this is not a medical fact. The Supreme Court ruled in favor of Hobby Lobby in a 5-4 decision. Four of the five justices who ruled in favor of Hobby Lobby had Federalist Society ties. Today, six of the nine Supreme Court Justices are, or have previously been, supported by the Federalist Society: Samuel Alito (who wrote the leaked draft opinion), Clarence Thomas, Neil Gorsuch, Brett Kavanaugh, Amy Coney Barrett, and John Roberts.

Although the anti-abortion stance is often based on religious beliefs, it also has a lot to do with political power. Maintaining an anti-abortion stance has been a successful political organizing and electoral strategy for the GOP. Bill by bill, conservatives have made it increasingly difficult to access abortion procedures through measures like heartbeat bans. Model bills have been produced on various issues by groups like Project Blitz and Alliance Defending Freedom to systematically restrict reproductive rights at the state level. Anti-abortion groups have also formed alliances with organizations pushing other conservative-aligned agendas (i.e., gun rights, restricting LGBTQ+ rights, immigration rights) in order to form electoral coalitions to promote certain Republican candidates.

“A recent poll showed that nearly 70% of Americans do not want to see Roe v. Wade overturned.”

Right-wing elites are making abortion rights appear divisive but they are not. A recent poll showed that nearly 70% of Americans do not want to see Roe v. Wade overturned. Abortions are not about religious freedoms. Rather, the abortion debate is part of a manufactured “culture war” that serves to divert attention away from bread-and-butter economic issues having a profound impact on working and middle-class voters. In this sense, anti-abortion politics serves to maintain power for a small and acutely conservative corporate elite (especially those tied to the polluter-industrial complex). This is evidenced by more than 70 countries having abortion rights, including countries with largely Roman-Catholic populations. By overturning Roe v. Wade, the U.S. will become an outlier in working against a pregnant person’s right to choose.

Yet, what happens in the U.S. may reverberate abroad. Previous international landmark decisions—K.L. v. Peru, Alyne da Silva Pimentel v. Brazil, and R.R. v. Poland—have influenced battles over reproductive rights in other countries. The precedent set has strengthened the human right to sexual and reproductive health. However, current circumstances in the U.S. beg the question: what legislative impact will striking Roe v. Wade have? Will this give other conservative governments sufficient grounds to refute the right to an abortion or contraceptive care? It remains to be seen what sort of global ramifications criminalizing abortion in the U.S. will have in other parts of the world, especially those with more authoritarian governments. 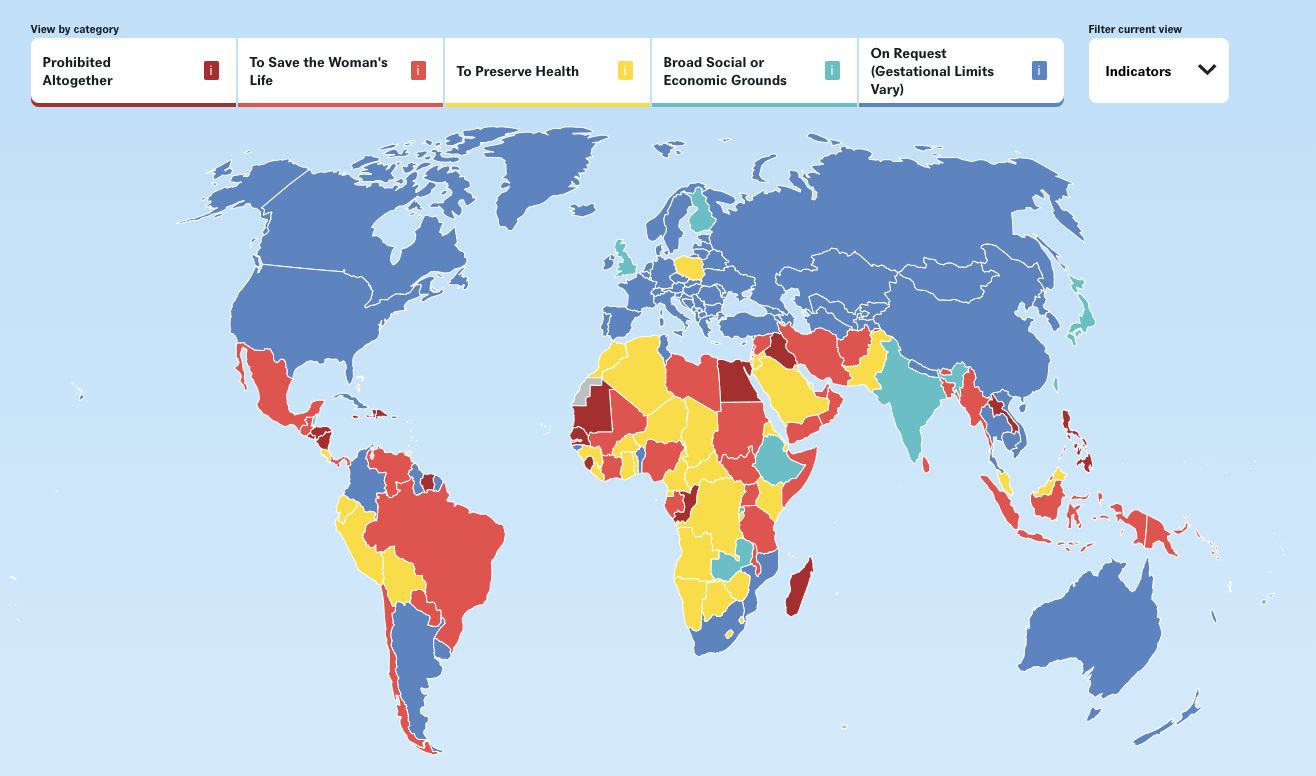 The National Consequences of Criminalizing Abortion

This attempted takedown of Roe v. Wade is just the beginning. It sets the precedent for the dissolution of many other rights (i.e., same-sex marriage, regulation of greenhouse gas emissions) that are not explicitly in the Constitution. If Roe v. Wade were overturned, the legality of abortion would be left up to states. Many states have already established trigger laws that will make abortion and other reproductive health services inaccessible in approximately 21 states, with a combined impact on over 135 million people.

The consequences of revoking abortion rights will exacerbate gender and racial inequities of which BIPOC individuals will face the greatest burden. BIPOC individuals are more likely to work in low-wage service economy jobs that provide little to no health benefits and no paid maternity or paternity leave. Historically racist health care services place Black parents and babies at higher mortality rates than white people during and after birth. The climate crisis perpetuated by fossil fuel use (i.e., rising temperatures, air pollution, sacrifice zones, disruption due to extreme weather) is increasing miscarriages. Doctors cannot distinguish between a miscarriage and abortion, and in some states (such as Texas) this exposes people who have endured a miscarriage to possible criminal prosecution. The legacy of redlining has further perpetuated environmental racism as climate change exacerbates environmental hazards in predominantly Black communities. It is clear—access to abortion is an economic, health, racial, and environmental justice issue in one.

The socioeconomic effects of climate change are not gender neutral. Women are 14 times more likely to die in extreme weather events. The LGBTQ+ community is at a heightened risk during extreme weather events as they experience disproportionately high levels of homelessness. Evidence also shows that climate change may increase vulnerability to sexual violence, transactional sex, and sex trafficking, which may lead to unwanted pregnancies. This vulnerability is exacerbated amongst individuals that are refugees, migrants, part of the LGBTQ+ community, living in poverty, or living with disabilities. Climate change-related disasters can also disrupt access to reproductive care services. For instance, in the aftermath of Hurricane Maria, many Puerto Ricans did not have access to the necessary resources required for a safe childbirth. The gendered impacts of climate change have significant repercussions on the physical and emotional wellbeing of women, trans, and nonbinary indidivuals and necessitate an outcry for justice.

The climate crisis is intensifying the need for global reproductive justice. We are already seeing the effect of climate change on births and caretaking in the U.S. and abroad. Striking down abortion rights, particularly Roe v. Wade, will have long-lasting political and social effects and threaten the health and safety of millions. Conservative political elites have used abortion as a way to whip up constituents, maintain relevance, and manipulate the political system to serve the desires of a select few. But in doing so, they have also placed themselves at odds with the trends towards better reproductive justice in the rest of the world.

Reproductive justice intersects with racial, gender, LGBTQ+, health, economic, environmental, and climate justice. Like all movements addressing discrimination, reproductive justice seeks to improve the socioeconomic condtions sustained by the systemic oppression of marginalized communities. Ecofeminism highlights this dynamic by depicting the parallels between women (and all marginalized peoples) and nature repressed by our patriarchal society. But this incessant societal desire to control and dominate must be brought to an end. We are all deserving of bodily autonomy, the right to choose, and the right to a clean and safe environment.

If you or someone you know is in need of an abortion provider in the U.S., please check this link for a provider near you.