support us
On the Brink of Collapse: Climate Change and Famine in Somalia
M
Schlegel 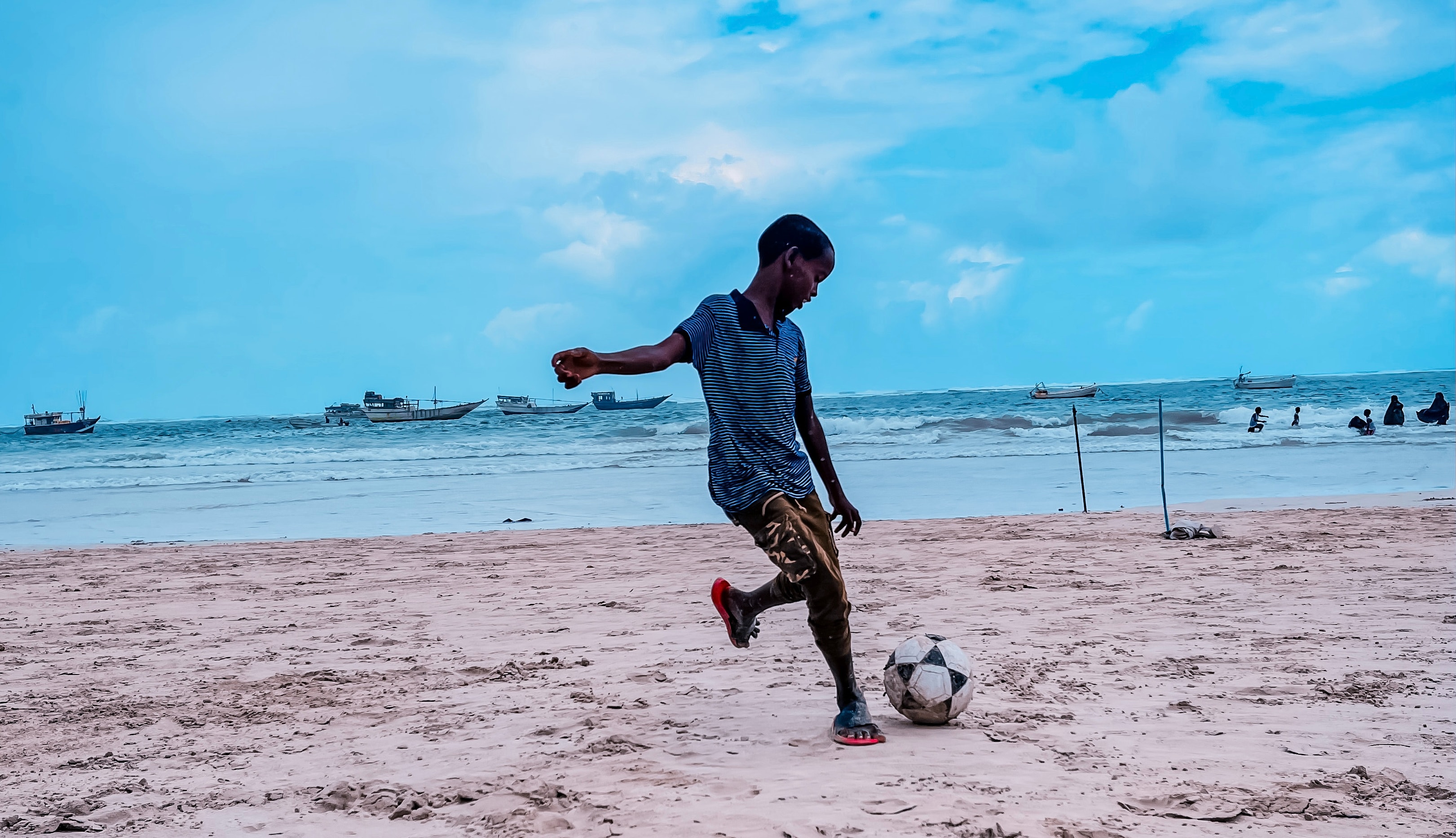 Following four failed rainy seasons in a row, Somalia is now facing one of the worst droughts ever recorded in the country. It has been over forty years since the country experienced a drought anywhere close to the magnitude of the current calamity. In short, this unparalleled drought is leading to extensive crop losses and the death of livestock, and consequently widespread famine. As stated by Million Belay, Coordinator of the Alliance for Food Sovereignty in Africa, “[Somalia is] producing half of what they were producing before…I think the first culprit would be the climate. I think the recent IPCC prediction is, probably, in the future, over 50 percent of the maize-producing area, close to 30 percent of bean-producing area would be normal…I think the frequency of these droughts, the severity of these droughts is increasing, and climate change is the cause.”

[Somalia is] producing half of what they were producing before…I think the first culprit would be the climate.

Although this is not the first of Somalia’s struggles with drought and famine this decade, it is proving to be the worst.  Nearly half of the country’s entire population – about eight million people – are currently considered food insecure and in need of urgent humanitarian assistance. Additionally, over one million people have already been displaced as a result of drought and famine so far this year. This displacement has led to a 135 percent increase in the number of people moving between camps for Internally Displaced Peoples (IDP) in the region. They are among the growing number of climate refugees that are seeing their traditional ways of life being destroyed by climate change and neo-liberal development models. And not only in Africa, but around the world.

The famine is only growing worse. A startling 1.5 million children are currently considered undernourished—and that number is increasing. Of the eight million people currently considered food insecure, up to 80 percent are women and children, who have an increased difficulty generating a source of income in order to afford the ever-increasing costs of water and food in the region. The price hikes of essential commodities are not just a result of local food scarcity due to climate change, although that is a significant factor. The Russia-Ukraine conflict and the rise in global oil prices is also playing a significant role in the issue as well. The price of fuel has skyrocketed in Somalia, which has traditionally relied on the gas and oil supplied by Russia and Ukraine for transportation.

Since Russia invaded Ukraine in February of this year, gas prices in Somalia have increased by 45 percent. The average price of fuel in Somalia in January of 2022 was $0.60 US Dollars a liter. By July, the price of fuel had shot up to $1.20. As a result, the people in Somalia have been experiencing extreme difficulty accessing transportation all across the country. Additionally, Somalia has traditionally received around 85 percent of its wheat imports directly from Russia and Ukraine— some 50 percent from Russia and 35 percent from Ukraine. According to Democracy Now, these factors have combined to cause the price of essential commodities in Somalia to increase by up to 160 percent.

The prevention of these shocks in Somalia has been particularly tricky for many reasons. In short, the Somali government lacks the structure, authority, and funds to engage in preventative measures that protect lives and essential economic sectors. Climate change serves to worsen these economic vulnerabilities, particularly among the poorest segments of the population. The agricultural sector, which accounts for 65 percent of Somalia’s GDP, is being decimated by the drought.

The ongoing military conflict within the country also contributes to the government’s lack of authority and, at times, has even interfered with the minimal aid they have received in the past. Around 500,000 people are estimated to have been killed in Somalia since the start of the military conflict that has raged over the past four decades. It has mutated from a civil war in the 1980s, through state collapse, clan factionalism and warlordism in the 1990s, to a globalized ideological conflict in the first decade of the new millennium. Ultimately, Somalia suffers from what can be referred to as a “development deficit,” a phrase which Adam Abdelmoula coined in his interview with Democracy Now in early September of this year. For example, Somalia has two rivers that flow out to the Indian Ocean within its political boundaries and yet neither possesses nor employs any infrastructure to harvest the water as a resource for just and sustainable development projects. The reasons for Somalia’s “development deficit” are both anthropogenic and natural. A long history of political instability, the lack of democratic practices, and a more recent history of dramatically changing weather patterns both created and continue to exacerbate the country’s extreme climate–related disasters.

A considerable factor in Somalia’s struggles with drought and famine is its history of political instability. This history spans centuries, beginning really with its colonization carried out by four different countries. Great Britain, France, Italy, and Ethiopia split the country into five distinct parts. Ever since, there has been great dispute about the internal boundaries, which also has and still does contribute to the political instability. Since both the northern and southern regions of Somalia gained independence separately in the summer of 1960, the country has attempted to heal from the very literal fracturing it experienced. For the first nine years of its independence, Somalia had a democratic form of government. In 1969, however, a military coup spurred by the increasing international influences during the Cold War transformed the country into a socialist state. This period of Somali political history is what is referred to as the Barre regime period, as the leader of the military coup was named Siyad Barre. Barre’s regime ruled Somalia until 1991 when it was overthrown. This period in Somalia’s history is extremely significant, as many look back upon Barre’s failed conflict with Ethiopia over the Ogaden region in 1977 as the root of the country’s current lack of centralized governmental power and authority. In addition, international influence and meddling throughout the past few decades has contributed heavily to corruption, failed peace talks, and a general distrust of centralized power by the Somali people. This has resulted in a perpetual civil war in Somalia sustained by a largely powerless central government and a conversely stronger collection of local clans.

The political instability might be the root cause of Somalia’s difficulty with adapting to and preventing disasters, but climate change is certainly a significant factor as well. The climate is not only changing, but it’s changing rapidly. In fact, in the past thirty years, the number of climate-related natural disasters has tripled in Somalia. Roughly 60 percent of the country lives in rural areas as pastoral-nomads. In a span of nine years, between 2007 and 2016, Somalia suffered six extreme droughts. Additionally, some of these droughts have been followed by intense rain which causes severe flooding, washing away parched crops and infrastructure. It’s nearly impossible for crops and livestock to survive such events. The droughts first dry up the land and cause the livestock to go thirsty. Then, the flooding washes away the topsoil and harms the livestock in the process as well. The rain also rarely provides the necessary relief from prolonged drought that the people and livestock need to survive. These droughts and flash floods often occur as a result of El Niño, El Niña, and Indian Ocean Dipole events, which change the temperature and the circulation of the ocean. Furthermore, geospatial projections created by the World Bank’s Poverty Group predict that droughts will not only continue to increase in Somalia, but that the poorest regions will be among the most deeply impacted.

Political instability and rapidly changing weather patterns are creating the conditions of economic insecurity, drought, and famine. And, in many ways, each individual issue exacerbates the others. The political instability has resulted in a weakened central government that lacks power and resources to prevent and end droughts and famines. This includes the provision of health care, which becomes even more necessary during a famine. As stated by Adam Abdelmoula, the United Nation’s humanitarian coordinator for Somalia,“...the case of conflict and the absence of a central government have rendered the health facilities in Somalia very, very fragile, and many of these hospitals and health centers are suffering from shortages of medicines, supplies, nutrition supplies in particular, and also adequately trained personnel.”

The country then relies heavily on foreign humanitarian aid, which is almost always reactionary and inadequate to the task at hand. Some clans and organized groups have even been known to interfere with humanitarian aid by way of intercepting imports and blocking off transportation routes in order to secure their control over certain lands and resources. In this respect, Somalia appears to be stuck in an ill-fated cycle. As climate change degrades the agricultural base of the country, the government cannot provide for its people or raise funds. Without resources and funds, there’s an inability to invest in preventative measures that could help lessen the impact that such intense natural disasters have on the people of Somalia.

The country then relies heavily on foreign humanitarian aid, which is almost always reactionary and inadequate to the task at hand.

‍Breaking this cycle of disaster and conflict will not be easy. But it is possible. The world community must come together and help build an alternative model of just and sustainable development in Somalia that is oriented to meeting the needs of all people. Investment in food production must be accelerated, especially for small-holder farmers and pastoralists (e.g. hardier crops, cheaper inputs, disaster risk management). More aid and development assistance should be targeted to addressing the causes of social breakdown which give birth to famine. That means investments not only in physical infrastructure (roads, irrigation projects, communications, etc.) and allowing public intervention to correct market failures (such as the hoarding of grain and fuel). It also means much greater long-term investment in food production and in meeting the basic development needs of ordinary people so that they have the capability to weather the storm of climate change.

LATEST ARTICLES
2022 Midterms: Voter Suppression and “Big Lie” Propaganda on the Rise
Ben
Whitaker
The Heat is On in China and Europe
Georgia Connolly
and Ben Whitaker
Back to NewsletterFull IssueLatest Issue