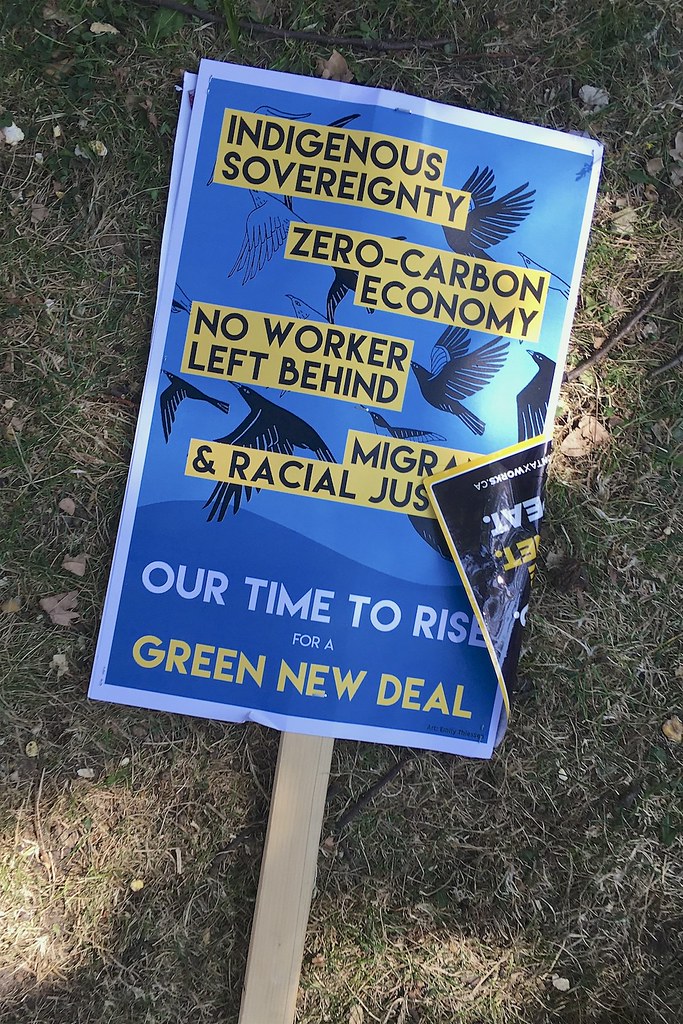 It is now clear that socioeconomic inequalities drive emissions-intensive consumption and production, facilitate the obstruction of climate policies by wealthy elites, undermine public support for climate policy, and weaken the social foundations of collective action. This suggests that integrating certain carbon-centric policies into a wider program of social, economic, and democratic reforms would achieve decarbonization more effectively than carbon-centric policies alone.  That is the conclusion reached by Fergus Green and Noel Healy’s in their One Earth article, “How Inequality Fuels Climate Change: The Climate Case for a Green New Deal.”

They should know. Fergus Green has spent the last 14 years working on climate change from multiple disciplinary perspectives, in numerous countries and in various professional capacities. He completed his Ph.D. in Political Science at the London School of Economics and Political Science, and now teaches Political Theory and Public Policy in the Department of Political Science and School of Public Policy, University College London.  Similarly, Dr. Noel Healy has spent the last few years working on climate justice, public policy and inequality, fossil fuel politics, and economic and racial justice in climate and energy policy. He is a contributing author for the United Nations Intergovernmental Panel on Climate Change (IPCC) 6th Assessment Report (AR6/WGIII), and a Ludwig-Maximilian University (LMU) of Munich Rachel Carson Fellow. He is also a Research Fellow here at the Global Center for Climate Justice.

In their work, Green and Healy show that the common policy components of what constitute Green New Deals (GNDs) do indeed tackle the causal mechanisms by which inequalities fuel climate change. For them, GNDs thus offer more effective political strategies than carbon-centric policies. Just as importantly, GNDs also offer the potential to reduce socioeconomic inequalities that fuel the climate crisis. In short, the framework of a Green New Deal possesses the proper scope, scale, theory of change, and governing philosophy to begin dismantling the social and economic causes of the global ecological crisis.

Green and Healy believe that Green New Deals, if implemented properly, can provide the types of strong social, democratic, and economic reforms that are not normally part of traditional environmental legislation. Such conventional approaches are incapable of mending the intersectional injustices that are heightened and exacerbated by the climate crisis.  Take the carbon footprint of the richest 10 percent of the world’s population, for instance. This “superclass” of wealthy elites are able to spend tremendous sums of money on luxury goods that disproportionately release greenhouse gasses into the atmosphere. The top 10 percent of wealth holders are today responsible for over half of global carbon emissions. Green and Healy write that, “substantial cuts in emissions could thus be achieved by mitigating the enormous income and wealth accumulation at the top of the distribution, or more steeply taxing or limiting carbon-intensive luxury consumption.” Such targeted policies would ensure that the right people are paying the climate debt. They conclude that “Global CO2 emissions could be reduced by 30 percent in 2030 relative to a business-as-usual baseline if the emissions of the 1.1 billion highest emitters globally were capped at the level of their least-polluting member.”

Current carbon pricing paradigms put too much emphasis and responsibility on the independent consumer, and are therefore unpopular among the general public because it makes energy and other goods more expensive. When carbon taxes are in place, there is the potential for consumer prices to rise, and for lower-income consumers to field a greater economic burden of this legislation. This is particularly true for carbon pricing mechanisms that do not return money to taxpayers [especially lower-income people) and/or communities of color and working class families. The regressive economic aspects of many carbon pricing approaches are then seized upon by what Daniel Faber terms the polluter-industrial complex – fossil fuel industry-funded think tanks, lobbying groups, etc., –  to mobilize conservative opposition to climate change legislation.

To combat this tendency, Green and Healy argue that “GNDs should be relatively popular, as they include and emphasize non-carbon measures that people value more highly and shift costs onto the wealthy.” This can be achieved by raising the minimum wage, guaranteeing good green jobs, and by providing more affordable, energy efficient housing. Such policies are more popular among the public, shift costs of climate mitigation to the rich, and curb the types of climate change impacts created by wealth inequality.

“Green New Deals enable governments to rapidly cut emissions while improving living standards for the overwhelming majority of people and shifting the costs onto the wealthiest in our societies. They offer a powerful vision commensurate with the scale of the problems we face.” - Fergus Green

In many neoliberal approaches to climate policy, emphasis is placed on the carbon-centric umbrella (carbon taxes, caps, divestments designed to discourage the consumption of fossil fuels). However, the successful mitigation of climate change cannot be achieved under these measures alone. Green New Deals offer a more comprehensive approach by addressing many of the root causes of fossil fuel consumption in the first place. The success of Green New Deal policies resides in the fact they would improve the quality of life for working people. As stated by Green and Healy, “Because GNDs integrate decarbonization into a broader political program of socio-economic reforms aimed at benefiting the vast majority, they have the potential to mobilize a broad-based coalition of worker- and community-aligned interest groups.” By improving the quality of life overall, Green New Deals are able to merge intersectional crises that impact people of different class, racial, and ethnic backgrounds.

In summary, Green and Healy provide a critically important framework for advancing a more emancipatory Green New Deal research agenda and politics. They successfully make the case for the necessity of a progressive climate legislation to counteract the social, environmental, and climate-related injustices grounded in a neoliberal economy. Furthermore, the authors remind us that the failure to attend to the global dimensions of the GND paradigm risks perpetuating neocolonial and extractivist patterns of accumulation and dispossession, albeit with a green gloss. In this respect, climate justice advocates in high-income countries have much to learn from greater engagement with those in low- and middle-income countries, and from marginalized communities everywhere. We must aim to tackle climate change, ecological destruction, and socioeconomic inequalities by working together. Their work is a fantastic reminder of why Green New Deal policy paradigms offer the best pathway forward for resolving the climate crisis and building a better life for all of the world’s inhabitants.