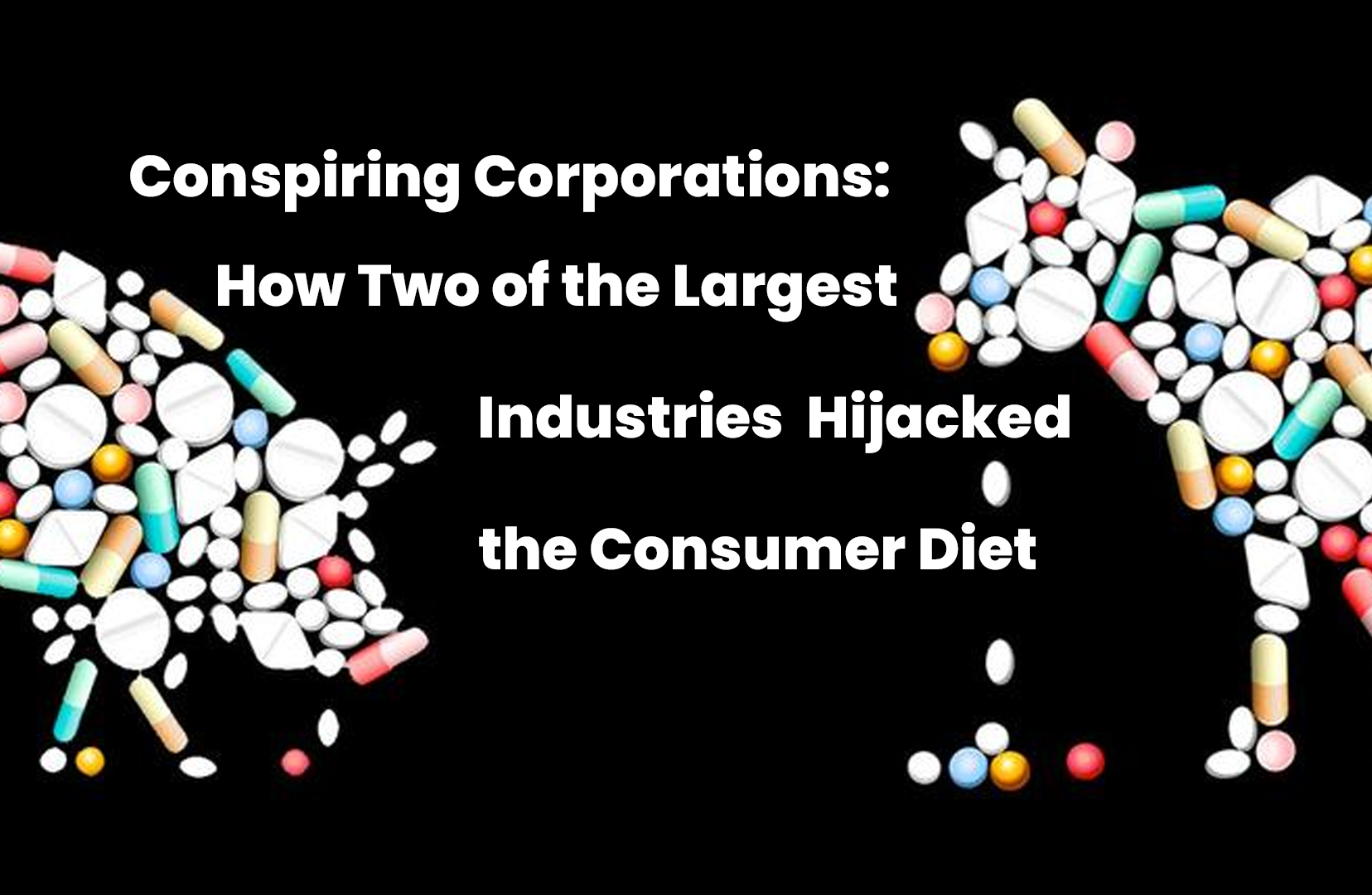 Despite warnings from health experts, the United States (US) government has failed to produce effective laws to address the AMR crisis. In fact, the absence of antibiotic regulations in the US is orchestrated by the Animal Agriculture and Pharmaceutical Industries, who oppose any legislation that could affect their profits. Both industries have spent millions of dollars to lobby against policy that restrict antibiotics use, even funding biased studies to disarm the public of their legitimate concerns around excessive antibiotic use. In fact, we can speak of both Big Pharma and Big Agribusiness as being part of what Daniel Faber terms “the polluter-industrial complex” – a sophisticated network of think tanks, public relations firms, research institutes, policy centers, foundations, and lobbying organizations created by major corporate polluters for the purpose of preventing sound environmental, public health, and climate policies from being enacted that would otherwise cut into profits.

Big Agribusiness, otherwise known as Big Ag, refers to the corporate agriculture industry, specifically factory farming. Big Pharma is a term used to describe the global pharmaceutical industry. These two “dirty” industries have been scheming since the 1950s, when it was discovered that growth hormones and the addition of antibiotics to livestock feed accelerated animal growth. Better yet, it was apparently more cost-effective than conventional feed supplements and additives. Collusion has always been at the forefront of the relationship between these two corporate sectors, joining forces in the adoption of business strategies designed to expand profits at the expense of public health and the environment.

"The World Health Organization (WHO) has cautioned that antibiotic resistant bacteria is one of the biggest threats to global health today."

From the very start, the animal agricultural and pharmaceutical industries “have walked hand in hand,” providing medicated feeds and water additives — specifically in concentrated animal feeding operations (CAFOs) — and “forming powerful lobbying blocks that can sway legislation.” There have been warnings about antibiotic proliferation as early as the 1940s, but the movement against antibiotics in animal feed and water really gained traction in the 1970s.  US Food and Drug Administration (FDA) regulators were powerless to stop proliferating antibiotic use because of the aggressive, misleading, and widely influential lobbying efforts of Big Ag and Big Pharma that left scientists divided on the research at the time. Today, it has been revealed that invested corporate resources in lobbying “far outweigh those invested by other civic sectors who might advance a more balanced public discussion about societal investment that may ultimately shape health.” For example, in 2015, the EU Transparency Registry found that there “177 full-time lobbyists working on pharmaceutical issues on behalf of the pharmaceutical industry versus the 48 advocating on behalf of the civil society.”

The amount that US-based “animal pharma” has spent on research and development has increased dramatically throughout the years, greatly aided by their lobbying success. In other words, Big Ag and Big Pharma have assumed corporate control over much of the research processes around antibiotics. There are three tactics that enable this control:

These tactics have been mastered by the Animal Agriculture and Pharmaceutical Industries to control public opinion and influence legislation. Their lobbying efforts have controlled the political narrative of antibiotics, allowing for virtually unrestrained use since the discovery of their impact on farming animals. This is despite scientists’ warnings on the effects of antibiotic resistant bacteria, and has not changed since the prevalence of widespread AMR in the 1970s. There are clear links between antibiotics administered to farmed animals and bacterial resistance in humans, which has ultimately led to one of the most profound global public health crises humanity has ever faced.

The exorbitant use of antimicrobials (including antibiotics, antivirals, antifungals, and antiparasitics) in factory farming operations is leading to Antimicrobial Resistance (AMR), which arises when bacteria, viruses, fungi, and parasites mutate and no longer react to antimicrobial medicines. Drug-resistance renders antimicrobial medicines powerless against many types of infections, and difficult to almost impossible to treat. Resistance initially occurs through mutations, but is then spread amongst organisms through the transfer of genetic material by bacteriophages or mobile genetic elements. This has left current medicines ineffective against resistant pathogens, raising the risk of disease spread, severe illness, and death. In the past, AMR was addressed by swapping resistant treatments for alternative antibiotics. However, this is no longer a feasible solution as there have been no new chemical classes of antibiotics discovered since the 1980s.

The WHO has stressed that new antibacterials are desperately needed, creating a list of priority pathogens that are facing AMR. Unfortunately, this list has yet to breed results, with the WHO classifying only six of the 32 antibiotics in clinical development in 2019 as innovative. Nonetheless, unless antibiotic use is drastically changed, new antibiotics only serve as a temporary solution until they suffer the same fate as current antibiotics and become ineffective.

Although AMR is a naturally occurring phenomena, it has been artificially accelerated by factory farming practices, including: (1) the “misuse and overuse of antimicrobials; (2) lack of access to clean water, sanitation and hygiene (WASH) for both humans, workers, and animals; (3) poor infection and disease prevention and control in health-care facilities and factory farms; (4) poor access to quality, affordable medicines, vaccines and diagnostics; (5) lack of awareness and knowledge; and (6) lack of enforcement legislation.” The confined nature of industrial animal agriculture allows ARB to spread effortlessly amongst organisms. In addition, according to the United States Department of Agriculture (USDA), resistant bacteria can also travel through “the air, be released into the environment when animals are shipped, and colonize livestock or processing plant workers who interact with their family or their community.” A single factory farming lagoon — open-air pits filled with urine, manure, and other waste — emit millions of bacteria, some of which may be ARB, into the air each day. Additionally, ARB persists in animal feces, which is often spread onto fields, and could leak into nearby water sources, enter groundwater, or even contaminate agricultural produce.

One of the most commonly used drugs in animal agriculture is Ractomine, which is an antibiotic used to increase animal weight before slaughter. The effects of the drug on human health are not fully understood. This unnatural growth aid leads to immobile overweight animals whose legs break from being unable to withstand the pressure. Ractomine has led to the more illnesses and fatalities among pigs than any other antibiotic, with side effects in animals including cardiovascular stress, musculoskeletal tremors, heightened aggression, acute toxicity, hyperactivity, and more. Because of these impacts, its use is restricted in 160 countries worldwide.  But not in the US. In fact, a 2020 study found that US “farm antibiotic use is 2.6 times higher than the median use in European countries and 60 percent higher than the average use throughout Europe.” American pro-antibiotic lobbyists argue that reducing the use of antibiotics in animal agriculture will gut the US economy. However, this claim does not take into account the overall economic cost of AMR. Aside from disability and death, AMR prolongs illnesses and results in longer hospital visits and more expensive treatments. This leads to soaring medical bills and significant financial hardships for affected individuals.

The former President of the World Health Organization, Dr. Margaret Chan, warns that the world is heading towards a post-antibiotic era where common infections will once become fatal again. This will signal the end of an era around modern medicine as we know it. Even though scientists have cautioned about AMR since the 1950s, a growing worldwide trend in meat consumption is estimated to drive a 69 percent increase in global agricultural antibiotic use from 2010 to 2030. This can be credited to an extremely organized collective effort by the animal agriculture and pharmaceutical industries. They have been able to control the narrative by instigating Public Relations (PR) campaigns, launching extensive lobbying efforts, offering financial incentives to political officials for their support, and funding studies that result in pro-industry conclusions. The film What The Health illuminates the influence of the pharmaceutical and animal agriculture industries, tracing funding from these two industries to institutes like the American Cancer Institute, Susan G. Komen foundation, American Diabetes Association, and American Heart Association. All of these institutes at the time of this film released guidance/recipes supporting the consumption of animal meat despite the excess of scientific evidence asserting health ramifications of eating meat — diseases these institutes are supposed to be against.

Big Ag has already spent $2.1 million lobbying in 2021, and is likely to beat its 2020 lobbying expenditures of $4.1 million. Four industries — JBS S.A., Tysons Food, Cargill, and Smithfields Food — control 53% of the meat processing market, and have consistently been the top four lobbying spenders of all groups in the meat processing industry for the past several years. Big Pharma has spent $266,846,347 lobbying in 2021 alone, spending more money than any other industry. These two industries consistently lobby against bills restraining antibiotic use, and with millions at their disposal, their influence is powerful.

A profound example of the complicity between the Animal Agriculture and Pharmaceutical Industries was their collaboration defeating the Preventing Antibiotic Resistance Act, Slaughter’s legislation, and the Delivering Antimicrobial Transparency in Animals Act. The first two bills addressed reducing preventative antibiotic use while the last bill would require drug manufacturers to report how these antibiotics are being utilized on farms. In 2013 and 2014, according to the Center for Responsive Politics, pharmaceutical companies against these bills dropped an impressive $14.3 million lobbying congress. The largest manufacturer of animal antibiotics in the world, Zoetics Inc., spent 1.01 million in 2014 to fight these bills, even forming its own political action committee (PAC) that gave $68,000 to primarily Republican Congressional candidates. Big Ag invested $9.2 million to oppose the three bills: The National Pork Producers spent $873,000, The National Chicken Council $640,000, and the US Cattlemen's Association $30,000. Their lobbying proved successful, as these bills were never ratified.

Around 80 percent of all pharmaceuticals used in the US (70 percent of which are considered medically important) are administered to farmed animals. The use of antibiotics on all animals, not just sick animals, has become industry standard. In 2018, drug producer Elanco created the slogan “Don’t Wait For Pig Zero,” encouraging precautionary use of their antibiotics in farmed animals and highlighting growth benefits. Elanco, who claims to “provide solutions for protecting and enhancing animal health” is doing the opposite of what the WHO has instructed farmers to do, namely to stop giving healthy animals antibiotics. Former state epidemiologist and public health veteran, Dr. Gail Hansen, told the New York Times that “the reality is that antibiotics and large-scale industrial farming really grew up together,” comparing the issue to climate change in that “by the time people understand and believe it, it may be too late.”

"Around 80 percent of all pharmaceuticals used in the US are administered to farmed animals. The use of antibiotics on all animals, not just sick animals, has become industry standard."

Clearly, in order to protect our health, and the health of the planet, we need to transition away from factory farming and industrial animal agriculture in favor of a new agricultural system predicated on agroecology, regenerative and sustainable agriculture, climate justice, food sovereignty, and food justice for all.  Only with the adoption of a Green New Meal can the health and well-being of current and future generations be secured.