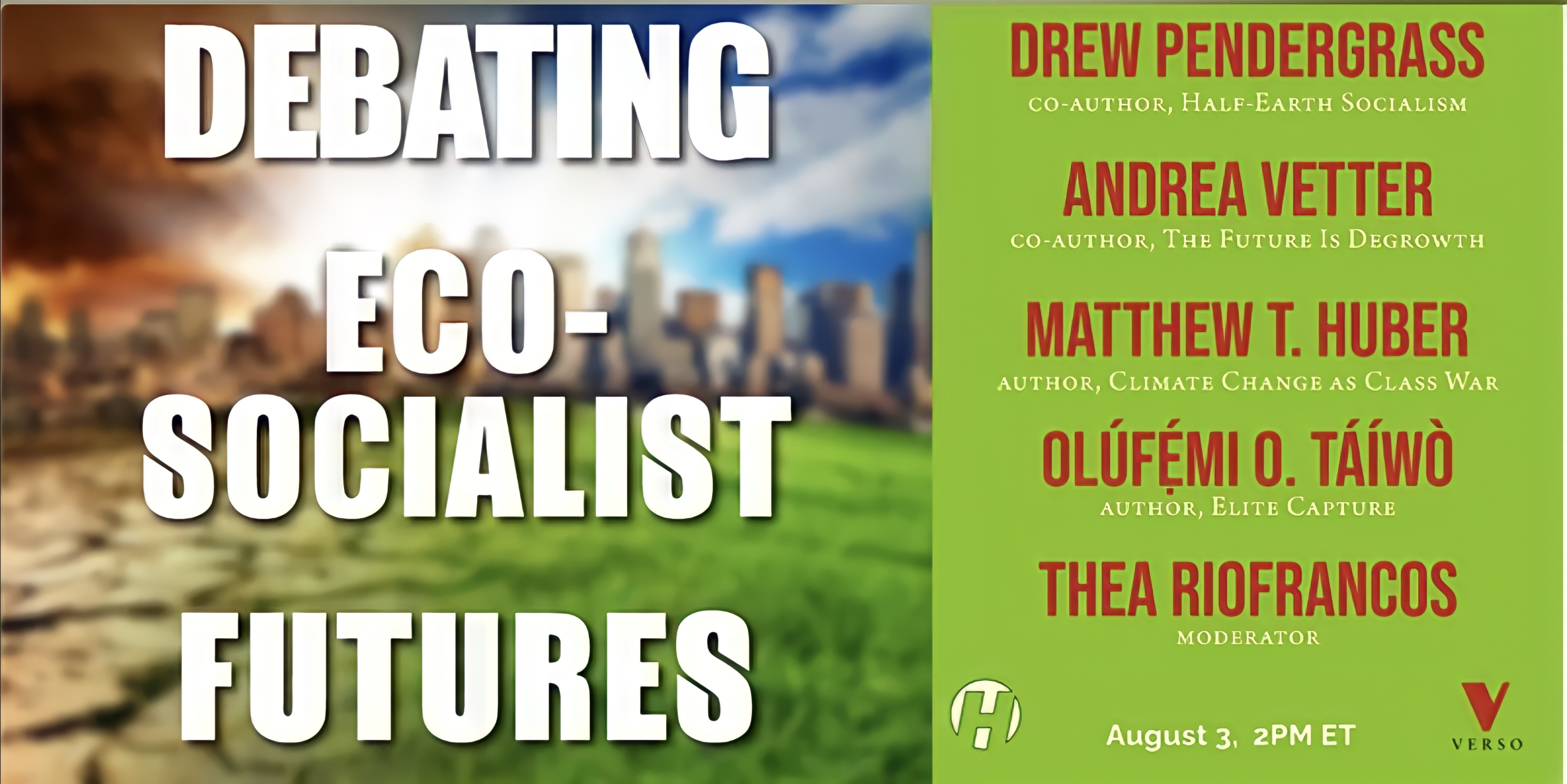 Ecosocialism is a concept that has grown in popularity over the years. With the Green New Deal taking world-wide attention, along with the continued failures of capitalist markets causing and perpetuating the ecological crisis, a green socialism seems, to many, the only way to avoid collapse.

But ecosocialism in the context of the U.S. and Europe has mostly been confined to essays, academic books, the journal Capitalism, Nature, Socialism, and Twitter back-and-forths. That is why it was so exciting that, for the first time to my knowledge, an “ecosocialist debate” occurred. On August 2nd, Haymarket and Verso books co-sponsored this debate, bringing together five ecosocialist authors who have different, but complementary interests and emphases. Moderated by Thea Riofrancos, the panel consisted of Drew Pendergrass, Matt Huber, Andrea Vetter, and Olúfẹ́mi O. Táíwò — all who have published books with either of the two radical publishing houses.

Each of these authors' texts expand the horizon of what ecosocialism is and means. For Pendergrass, his book Half-Earth Socialism focuses on utopian socialism, central planning, and conservation. Huber’s Climate Change as Class War attempts to reorient the climate movement’s strategy and appeal to become more working class. Táíwò’s Elite Capture and Reconsidering Reparations focuses on identity politics and the need for reparations in the context of the climate crisis, respectively. Vetter and her coauthors provide an explainer and argument for degrowth in The Future is Degrowth. Riofrancos is a Green New Deal veteran who co-authored A Planet to Win, a book that captured the energy and excitement of the late 2010’s, just as the climate movement was gaining momentum.

It was smart of the organizers of this event to bring such disparate, yet complementary ecosocialist thinkers together to discuss and debate common differences and similarities. The questions ranged from the general and visionary — “what kind of world do we want to build?” —- to the contemporary and specific — “what do you make of the most recent policy decisions in the U.S. and E.U.?”

Following much of his argument in Climate Change as Class War, Huber emphasized the role of the energy transition and the need to get U.S. industrial unions to embrace decarbonization. For him, the Green New Deal provides a positive vision in order to appeal to such unions as an opportunity to confront the climate crisis and improve people’s lives while we do so. Táíwò provided a global perspective, with a particular focus on the need for a broad coalition united under the banner of climate justice. What this means for Táíwò is to embrace a form of pluralism where regional conditions and values are respected but share a common solidarity among those flying the flag of team climate justice.

Vetter followed this sentiment with her embrace of grassroots organizing and the need for municipal action to avert ecological collapse. She provided examples in her own life including a “public-commons-cooperative” model where a local cooperative installed solar panels on public school buildings. Vetter believes the climate movement needs many “yeses” but also a common “no” in order to embrace the pluralism Táíwò mentioned.  In other words, while there are many possible alternatives that the movement could embrace, eco-socialists must stand firm against proposals (like new natural gas pipelines) that will act to deepen the global ecological crisis.

Pendergrass embraced utopianism — visions or descriptions of a better, more ideal future society —  as blueprints for the future, while providing many useful examples from his own and others’ experiences. His mention of the potential for unions to use “bargaining for the common good” was insightful because of the ways it can bridge the gap between the labor and climate movements towards a common strategy and goal. Pendergrass provided the example of teachers unions doing so, but applied their example to the ecological crisis where unions could bargain for the common good around green housing or electrified public transportation.

Some areas of agreement among all the panelists included that we are at the stage of the climate crisis where it is less about convincing people of the reality of a changing climate, but rather, a question of politics and power. That power, the panelists agreed, will not come from ecosocialists aligning with green capital who may build utility-scale solar panels, but will do so at the expense of community control and better siting of solar panel arrays. Pendergrass, Táíwò, and Vetter all agreed on the importance of a global ecological perspective that centers justice. For them, much of this work will happen at the local level and build up —- whether that is organizing with local unions or forming energy and food cooperatives. Similarly, these authors saw the climate movement as a broad coalition beyond just class or workers, but inclusive of anti-colonial and feminist struggles. Huber, while not necessarily opposed to these ideas (although critical), emphasized them less in order to center who he thinks is the agent of decarbonization — industrial union workers like electricians.
‍

“…We are at the stage of the climate crisis where it is less about convincing people of the reality of a changing climate, but rather, a question of politics and power.”

‍
While the debate was cordial and comradely, there were obvious tensions and disagreements. From the start, Vetter attempted to distinguish her position from Huber’s. In his opening remarks, Huber stated the problem of climate change was ultimately one of building, especially energy infrastructure. While Vetter agreed with the need for building out renewable energy, she claimed that the ecological crisis is not so much one about the need to build, but of care — to care for other humans and nonhuman life. This tension could be described as one author seeing the climate crisis as an energy and infrastructural problem, and the other seeing the ecological emergency as a social and cultural one. In the end, both are right: we need to replace our current dirty infrastructure largely with renewable energy, but we also need a social change in what we consume, how we produce, and what we value.

Another point of disagreement was regarding local vs. global efforts. Táíwò raised the critique that some Marxists are too dismissive of local efforts that seek to develop public goods outside the market, giving the political importance of food sovereignty as an example. Vetter, providing her own aforementioned examples, remarked that there are many “democratic organs” located in local and municipal levels for people to get involved in right now. Huber is skeptical of local organizing efforts, stating that “Goldman Sachs doesn’t care if you raise chickens.” Instead of building local power that is bottom-up, Huber is interested in developing a social force large enough to provide the big social provisioning we need to tackle the climate crisis. As Vetter quipped, Goldman Sachs also does not care if you write a book.

Speaking as an organizer myself, the idea that we are going to create a social force large enough to confront ecological collapse and capitalism without organizing on a local level (be it with your local electrical union or community land trust) is a form of wishful thinking, divorced from those of us actually doing the work. At the same time, there absolutely needs to be large public investments in energy, food, housing, and other essentials. Much of the time, these “small vs. big” debates are semantic and show the limits of one's understanding of how to actually build power with people. There is a necessity for both, and they have the potential to be positively reinforcing: the building of actually existing local alternatives build momentum for a larger international struggle for systems change while also providing proof it can be done.

Given this type of event was a first of its kind, there were limits to what was explored in the hour-and-a-half people virtually gathered. Personally, I would have liked to see more specific, even divisive questions on certain sectors or political programs being offered under the banner of ecosocialism. Degrowth — defined as a democratically planned and equitable downscaling of resource and energy use targeted at rich nations and the capitalist class — is an exciting yet polarizing concept, often (either ignorantly or willfully) misunderstood. A pointed question such as “do you support rich nations reducing the use of energy and materials?” would have fostered interesting conversation and debate on the topic. While all the authors understand the need to build new clean energy, other nodes of the ecological crisis were neglected — be it animal agriculture, biodiversity, or other planetary boundaries. Such a focus would have helped viewers understand the panelists broader ecological visions (or lack thereof) beyond just carbon reductionism. It’s time eco-socialists start embracing their prefix more.

Here at the Global Center for Climate Justice there was agreement that debates like these can easily be too theoretical and academic to be accessible to those on the ground doing climate justice movement building work. This makes sense after all: most of the panelists work in academia and have varying levels of involvement with political organizations. It is worth criticizing some of the heavier Marxist and pluriverse jargon that can happen in these spheres and reflecting on how we can make ecosocialism more accessible and appealing to people who have not read Capital. That is why I appreciate many of the concrete examples that were mentioned that people outside of academia can build on: bargaining for the common good, municipal electric cooperatives, and the recent Constitutional Convention in Chile, to name a few.

Despite some unanswered questions, this discussion helps bring ecosocialism debates outside of Twitter. Instead, it offers the future opportunity for more regular face-to-face dialogue where theorists, organizers, and political movements can properly expand on their ecological philosophies, strategize together, and confront some of the more ridiculous strawmanning that can happen. Each of these thinkers bring a unique perspective and analysis. Any comprehensive ecosocialist program will inevitably draw on each, in varying degrees. Lockdown is over! Let's rebuild the environmental movement with a critical anti-capitalist and ecological edge.

A primary goal of the Global Center for Climate Justice is to present such debates and analyses in a popular discourse which is accessible to the broader public, and to help bridge the gap and unite the work of Left academics and activists. Doing so is key to building a more emancipatory climate justice movement.Andrew Ahern is an ecological activist and organizer, freelance writer, and member of the Sunrise Movement and Boston DSA. You can follow him on Twitter @PoliticOfNature.