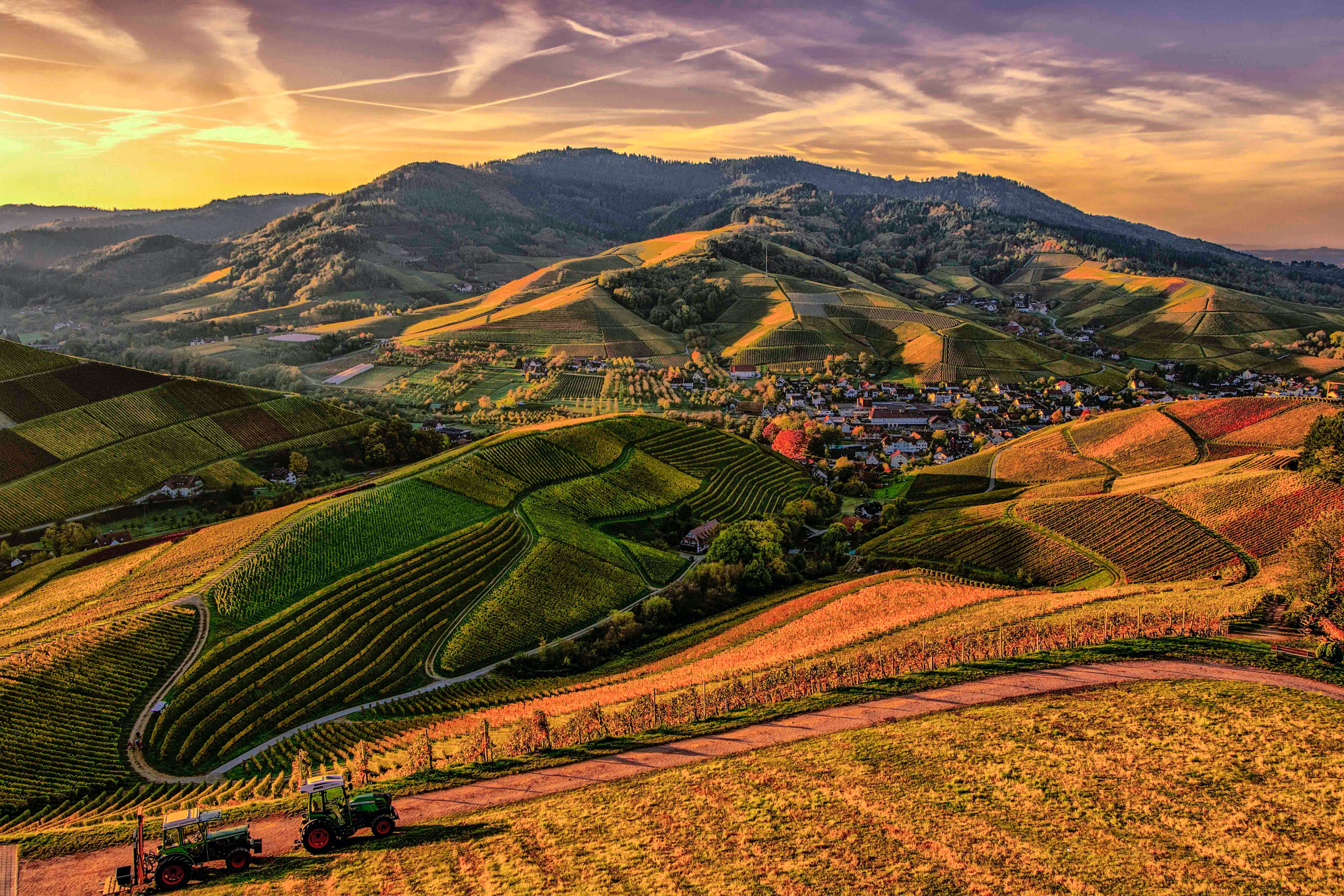 Regenerative Agriculture (RA) is an approach to sustainable agriculture which aims to counter the many negative impacts of the current industrial agricultural system by implementing practices that regenerate, rather than destroy, soil and ecosystem health. RA prioritizes amplifying ecosystem services, or the beneficial impacts of healthy ecosystems, such as plants’ abilities to sequester carbon dioxide (CO2) into soil carbon, or fungi’s ability to break down soil toxins. RA also includes practices such as rotational grazing of farm animals, planting cover crops, composting, and the use of crop rotation, among others.

RA is an imperative component of addressing the existential threat of climate change. The current industrial food system is responsible for 44-57 percent of all global greenhouse gas emissions, is the leading cause of biodiversity loss and the largest consumer of freshwater globally (about 70 percent), and produces a global paradox of malnutrition which manifests as both starvation and obesity. This final contradiction makes it clear that the main issue with our global food system is not a question of productive capacity, but of distributive efficiency.

RA is a growing and somewhat controversial field, receiving criticism from both right-conservative and left-progressive organizations for different reasons. RA exists on a spectrum between permaculture, agroecology, and traditional ecological knowledge. All of these are paradigms of land and agricultural management which share certain characteristics of RA, but employ different cosmologies, or ways of understanding the nature of the universe. Permaculture (a combination of the words “permanent” and “agriculture”) is a set of principles that guide agricultural projects to work with natural processes instead of fighting against them. Permaculture was popularized by Bill Mollison. It is often criticized for replicating systems of oppression that stem from colonization by appropriating, branding, and commodifying traditional ecological knowledge practices without compensating or crediting the communities from which these practices were learned.

RA is often colloquially, but somewhat inaccurately, referred to as “agroecology,” as both tend to bring whole-systems perspectives to agricultural systems. However, agroecological practices tend to have a more explicitly radical political alignment, and are associated with the global movement for food sovereignty. Agroecology brings an ecological perspective to the problem of agriculture, centering equitable land access and female empowerment as two of its key tenets. While many RA practices overlap, such as increasing biodiversity to help with pest management, agroecology is explicitly focused on using agricultural systems to disrupt global neoliberal geo-political structures. These structures include the World Trade Organization, structural adjustment policies, and financialization of food and land especially in the Global South; proponents of agroecology fight for sovereign land stewardship to be free from the pressures of the global market.

Proponents of Indigenous land stewardship, which uses traditional ecological knowledge rather than relying on Western scientific discoveries, have provided criticisms of RA policies because they do not offer a fundamental shift in values. While RA mimics Indigenous land practices, it stops short of making land available for Indigenous use, respecting treaty rights, or giving stolen land back to Indigenous groups. Their critique is heavily supported by the fact that although Indigenous groups comprise less than five percent of the global population, they protect 80 percent of the world’s biodiversity. Indigenous efforts to protect land and water from pipelines has and is currently stopping the equivalent of one quarter of all US and Canadian emissions. While RA practices address the symptoms of climate change, they do not address the root causes of the climate crisis: the capitalist and colonialist framing of nature as a resource which must be subjugated, exploited, and sold. This is diametrically opposed to an Indigenous framework of land stewardship which is rooted in relationality, kinship structures, and caretaking.

While RA practices address the symptoms of climate change, they do not address the root causes of the climate crisis: the capitalist and colonialist framing of nature as a resource which must be subjugated, exploited, and sold.

Indeed, capitalist organizations are readily finding new and interesting ways to co-opt and greenwash RA practices in order to make a profit. Unlike Organic Agriculture, RA is largely unregulated, undefined, and lacks certifications, making it an easy target for agribusiness appropriation. Climate Smart Agriculture (CSA) is another alternative to RA which is heavily promoted by the Food and Agriculture Organization (FAO) and the World Bank. Unlike RA, CSA envisions a future where agribusinesses develop seeds which are more resilient to climate change, and where no-till agriculture is achieved through more efficient pesticides and herbicides. While RA encourages polycultures and diversification, CSA upholds the industrial model of monocultures, which is a leading cause of biodiversity loss.

RA is sometimes framed as a “nature based solution” to sequester carbon, which provides an opportunity to fold soil remediation into carbon trading networks. However, while RA does improve soil carbon storage, the amount of carbon that can be sequestered in soil is also a last-ditch approach to the climate crisis that would be better addressed at the source point, the phase-out of fossil fuels. Additionally, soil carbon sequestration is only effective if the land is actively cared for. In other words, a year’s worth of sequestered carbon soil could easily be re-released if it were tilled the following year. From a climate justice perspective, RA is one of the worst commodities for carbon offset markets both because of its rather limited long-term carbon sequestration potential, and because of the injustice caused in implementing a system that is still expected to make a profit for agribusiness regardless of the rights of local communities. REDD+ policies were one such attempt. Passed at the global level, many of these policies facilitated the expulsion of Indigenous and small farmers from their ancestral lands in order to plant monoculture “carbon off-sets” for polluting corporations in the Global North.

Agriculture is the cornerstone of civilizations, and civilizations fall when the soil stops being able to grow food for people. Regenerative agriculture is a very important step in the right direction, especially as a framework for implementing circular food economies, where nutrients from food waste are returned to agricultural soils through comprehensive composting services, instead of being disposed of in landfills. This “closes the nutrient loop,” revives soils, and decreases the need for external inputs such as petroleum-derived fertilizers while enhancing the resiliency of our food system for future generations.

RA is a highly effective climate justice action because it has relatively low barriers to entry and can provide immediate positive income to the communities that practice it. Increased biodiversity in the macrobiome (the environment around us) leads to higher levels of biodiversity in the microbiome (the billions of bacteria that live in our bodies) which strengthens immunity and supports public health. Starting regenerative food projects inherently includes the question of land access and use, which provides an easy segue into other questions of equitable land use such as reparations, land back, commoning, and affordable housing. Meanwhile, food production and food waste management provide green jobs, food security, and increase local resilience to ongoing and future supply chain shortages.

Ultimately, RA opens a door to further interrogating our society's relationship with the planet that sustains us. For now, it is a first step away from our current destructive agricultural practices, re-orienting socio-economic and political values away from profit and extraction, and toward care and cooperation. The practice of caring for the earth and the soil that sustains us could be the cultural ripple that forces people to reject other socially sanctioned forms of violence — hunger, poverty, homelessness, war, and others. The global economy and social political systems need a rapid transformation to overcome the crisis of climate change — the soil is one good place to start.